Roosevelt Elementary is a 3rd through 5th grade school in the Fargo Public School District. The neighborhood consists primarily of single-family residential land uses. Within the Roosevelt boundaries, per capita incomes and median household incomes are significantly lower than the district average. More than 41 percent of students are eligible for free and reduced lunch programs. Less than four percent of students participate in English Language Learners programs.

Existing major corridors have adequate infrastructure in place for safe walking corridors to the school site, including a school speed zone on 10th Street N. Additionally, a pedestrian hybrid beacon (HAWK signal) on 10th Street N protects pedestrian and bicycle crossings along the primary east to west movement to the campus to and from neighborhoods east of the 10th Street N. 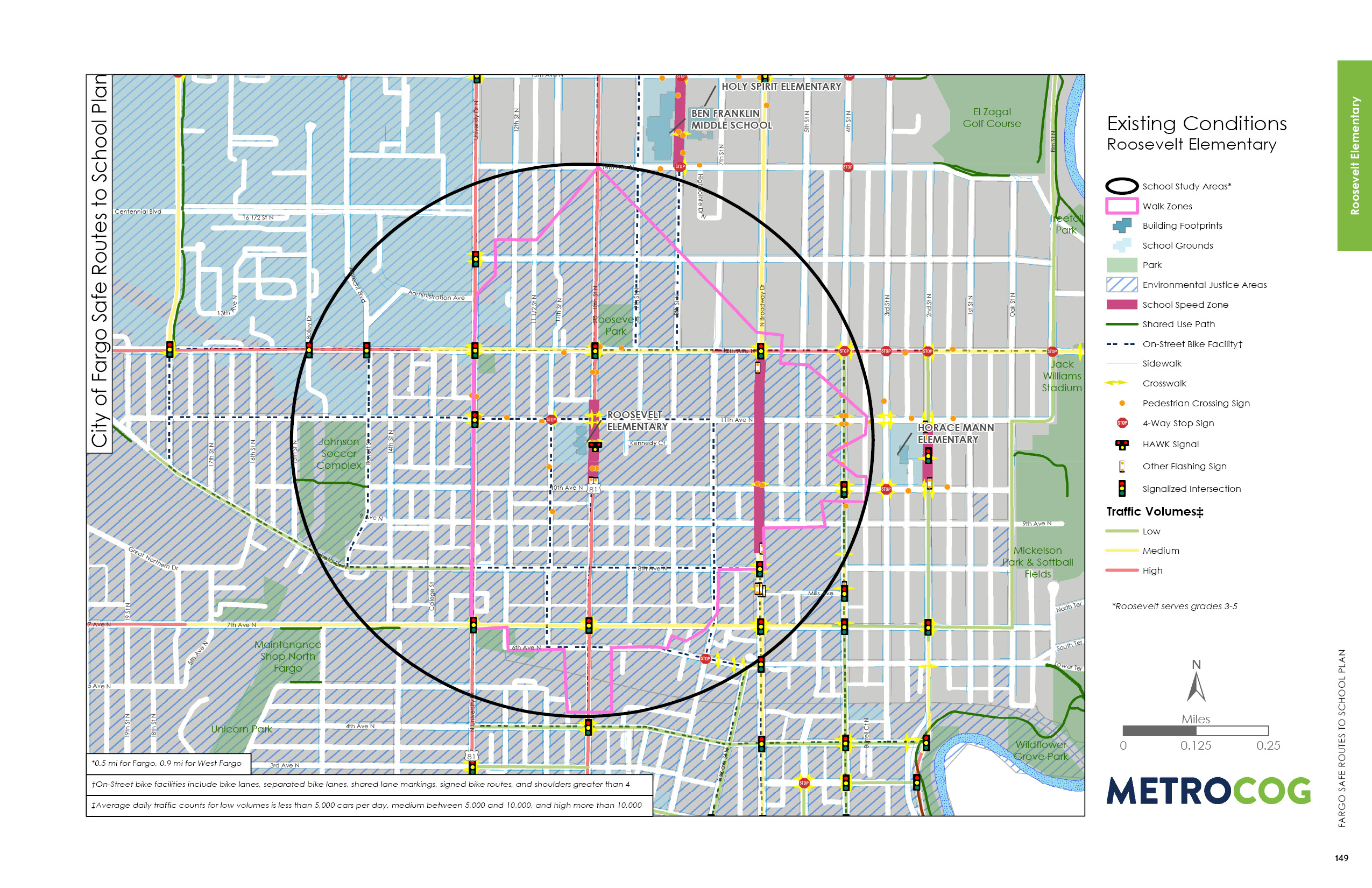 Roosevelt Elementary is located in a highly walkable neighborhood, but is adjacent to 10th Street N, a high traffic volume roadway that reduces comfort and safety for students who walk and bike.

11th Avenue N is a primary east-west circulation route for students walking or biking to school. There are bicycle shared lane markings on 11th Avenue N, but they are painted in the gutter and often covered by parked cars. This is not indicative of safe riding space for people biking, especially young children. 11th Avenue N is a wide roadway with long pedestrian crossing distances. The intersection of 11th Avenue N and Broadway is a barrier on the route between Horace Mann Elementary and Roosevelt Elementary due to the long crossing distances.

It is also common for parents/caregivers to drop-off and pick-up north of the school along 11th Avenue N, leading to students crossing 11th Avenue N midblock without any crossing amenities.

12th Avenue N is also a barrier for students biking and walking from the north. Along 12th Avenue N, there are multiple skewed and/or offset intersections, which increase crossing distances for pedestrians and bicyclists. The intersection of 12th Avenue N and 10th Street N is wide with high traffic volumes and observed speeding. There is a traffic signal, but it does not include a leading pedestrian interval.

There is a midblock crossing on 10th Street N in front of the school, but it has a long crossing distance that reduces pedestrian comfort. 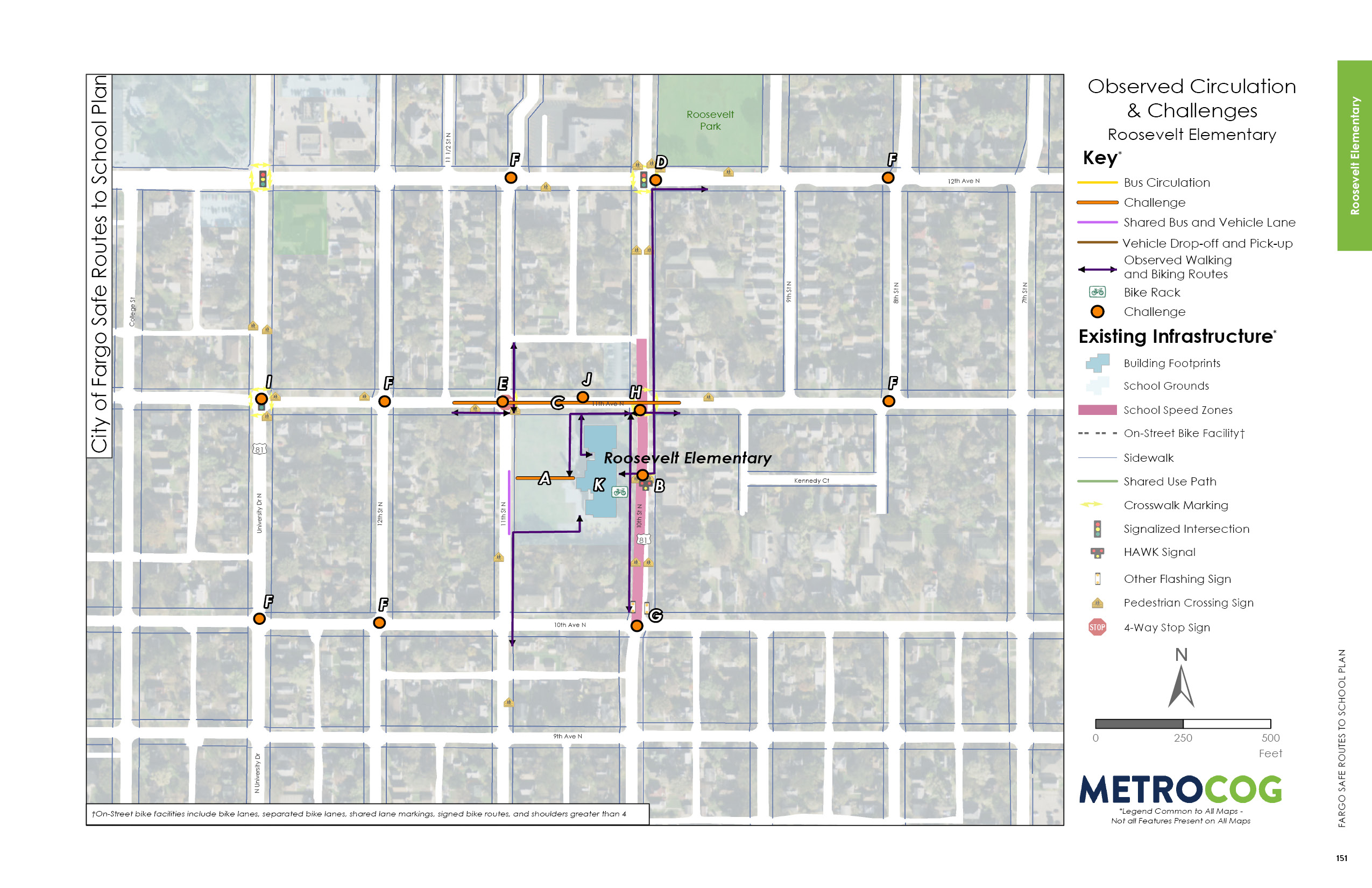 Several students were observed using the intersection of 12th Avenue N and 10th Street N at dismissal. The north/south crosswalk along the east side of the intersection could be shortened by installing a median pedestrian island in the excess roadway space.

While a high quality and signalized crossing exists midblock directly outside school, students were not observed and were unlikely to use it to cross 10th Street N if their destination is to the north. Therefore, the crossings of 10th Street N north of the school must be improved at both 12th Avenue N and 11th Avenue N. Improvements at 11th Avenue N should highlight the crossing to improve visibility and bring awareness to the school area. 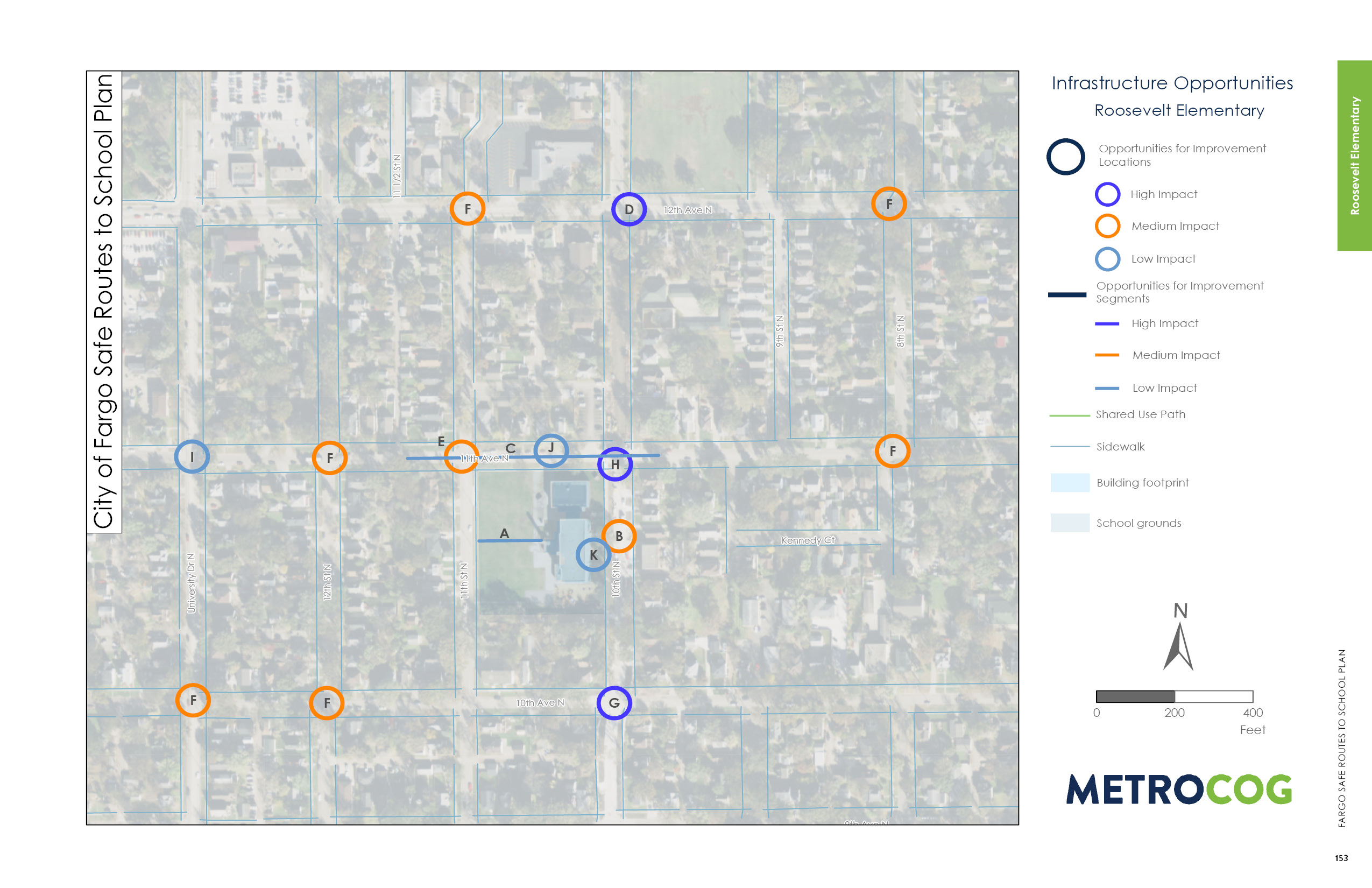 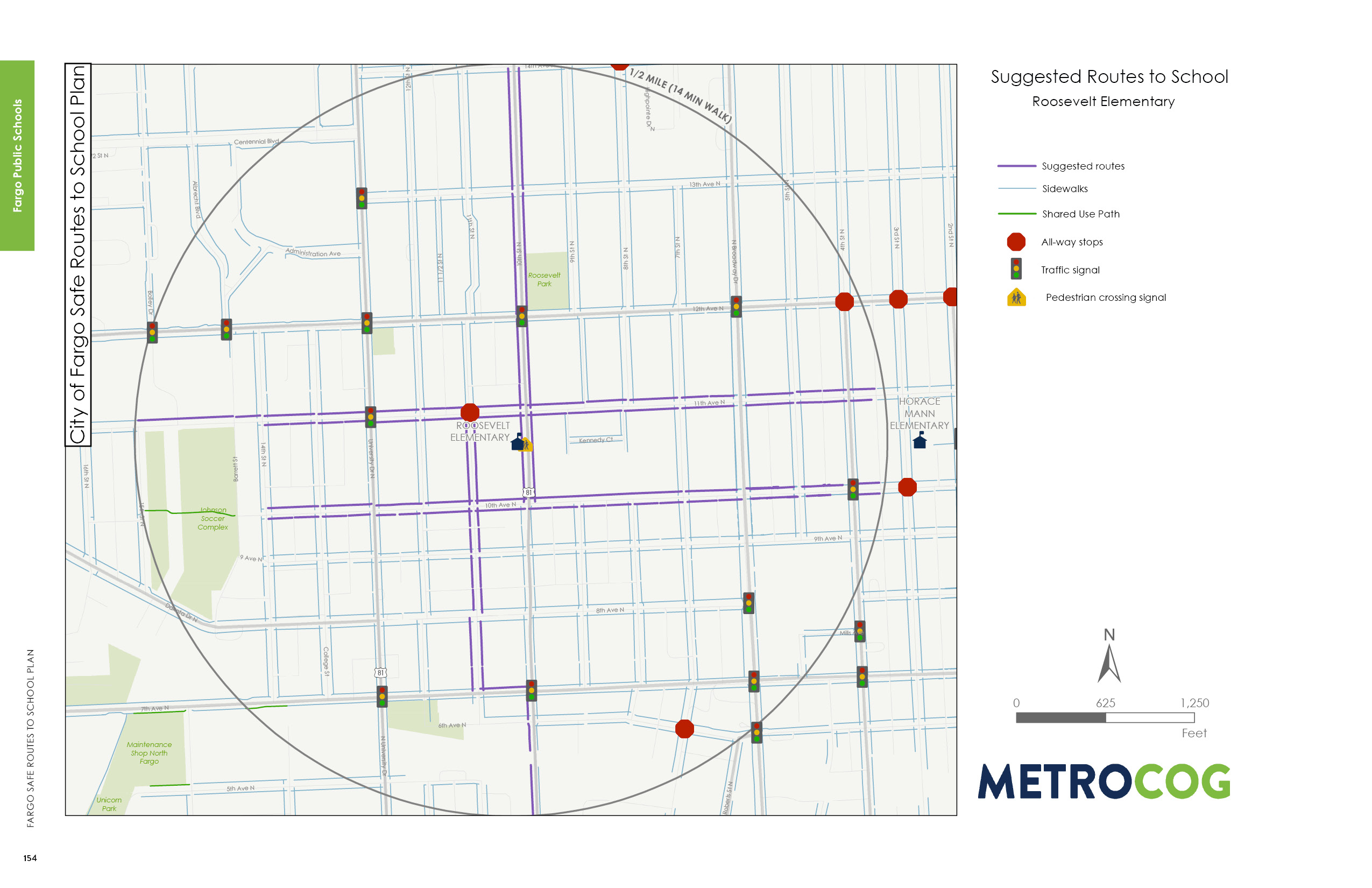 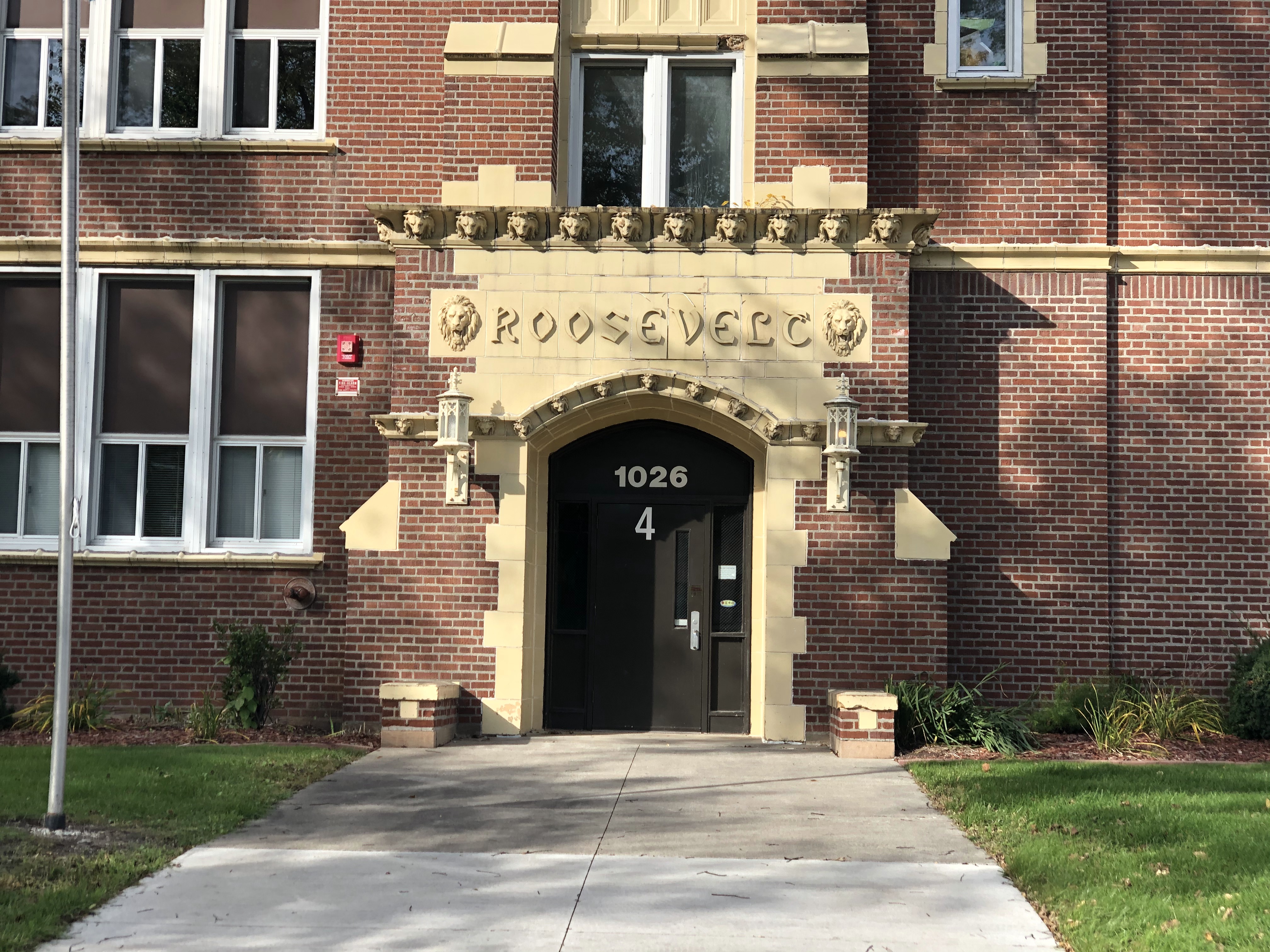 How to Get Involved at Roosevelt?