Nativity Elementary is a Pre-K through 5th grade private Catholic school and part of St. John Paul II (JPII) Catholic Schools Network. The school was established in 1961. It is located approximately two miles south of downtown Fargo in the city’s Clara Barton neighborhood.

Nativity Elementary’s campus is bound by University Drive to the west, 18th Avenue S to the north, 11th Street to the east, and Interstate 94 to the south.

11th Street S is a local roadway, but drivers were observed speeding around the corner form 19th Avenue S. Many parents voiced concerns about driver behavior in this location. University Drive and Interstate 94 are high traffic volume roadways that are uncomfortable to cross. 18th Avenue S is a local roadway, with increased pedestrian crossings and median refuge islands due to the proximity to Sanford South University Clinic. 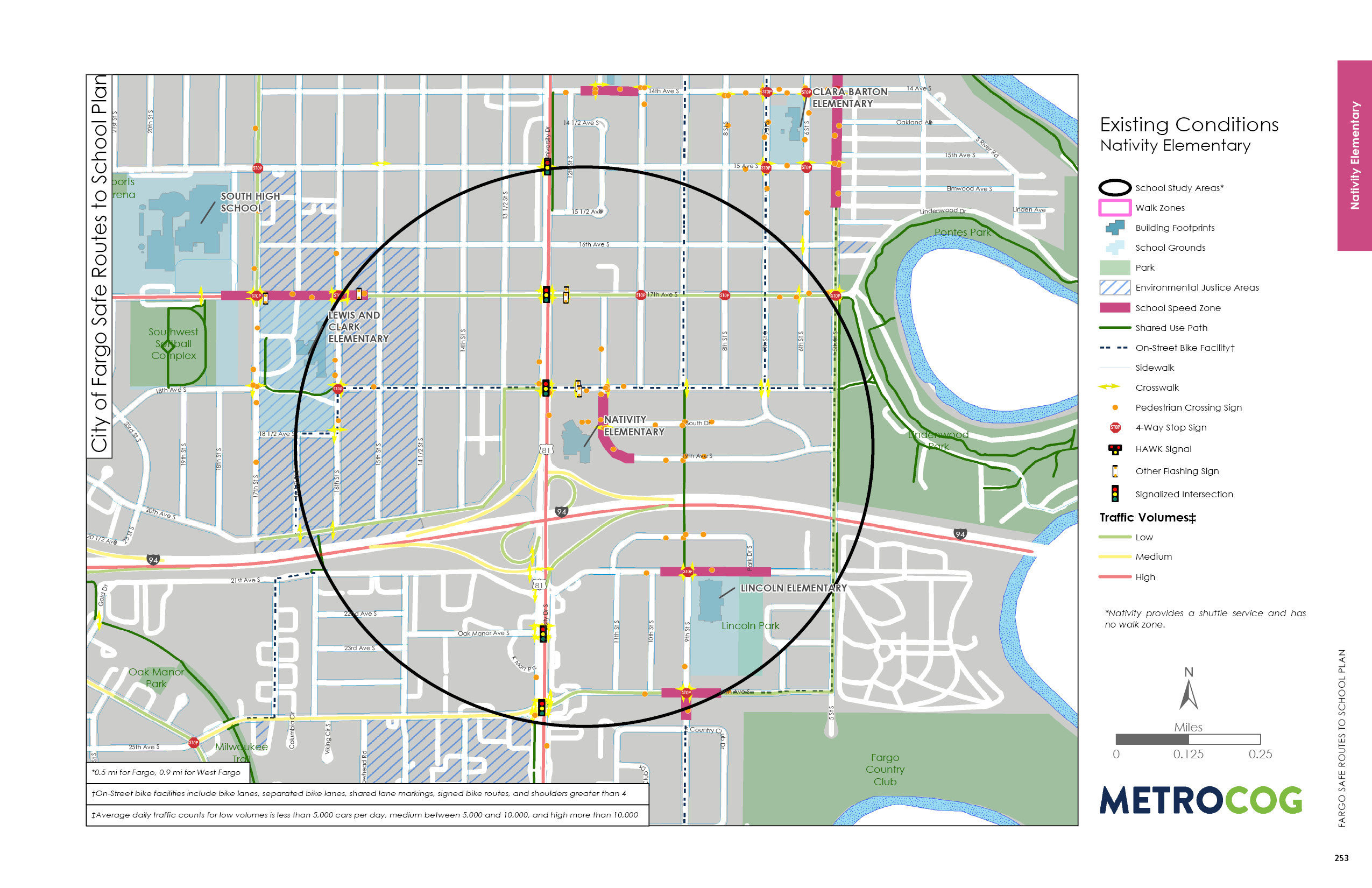 Bus and caregiver vehicles enter the Nativity parking lot from 18th Avenue S and exit onto 11th Street S in a one-way loop. A single bus picks up and drops off students along the curb adjacent to the main entrance. Parents park in the lot and walk students into the building, or drop off along a median in the parking lot. Parents who drop off along the median are instructed to stay in their vehicles, but many park and walk their students across the bus driveway into the school, resulting in some congestion issues and concerns with driver yielding behavior.

There are many opportunities to update pavement markings within the Nativity campus and the surrounding neighborhood. In the parking lot, pedestrian crossings could be consolidated and improved to better identify pedestrian routes to the front door.

Bicycle parking is located on the east side of the school and is not easily accessible or visible from the main entrance.

The intersection of 18th Avenue S and University Drive has marked crosswalks and is signalized, but due to the long crossing distances, high traffic volumes, and poor yielding behavior by turning motorists, it is not welcoming to pedestrians.

The most direct pedestrian crossing to Nativity Elementary was at 11th Street S/19th Avenue S and South Drive S. The north and south crossings at this location are signed, but only the south crossing is marked. Motorists were observed parking on the crosswalk and speeding in the school zone. 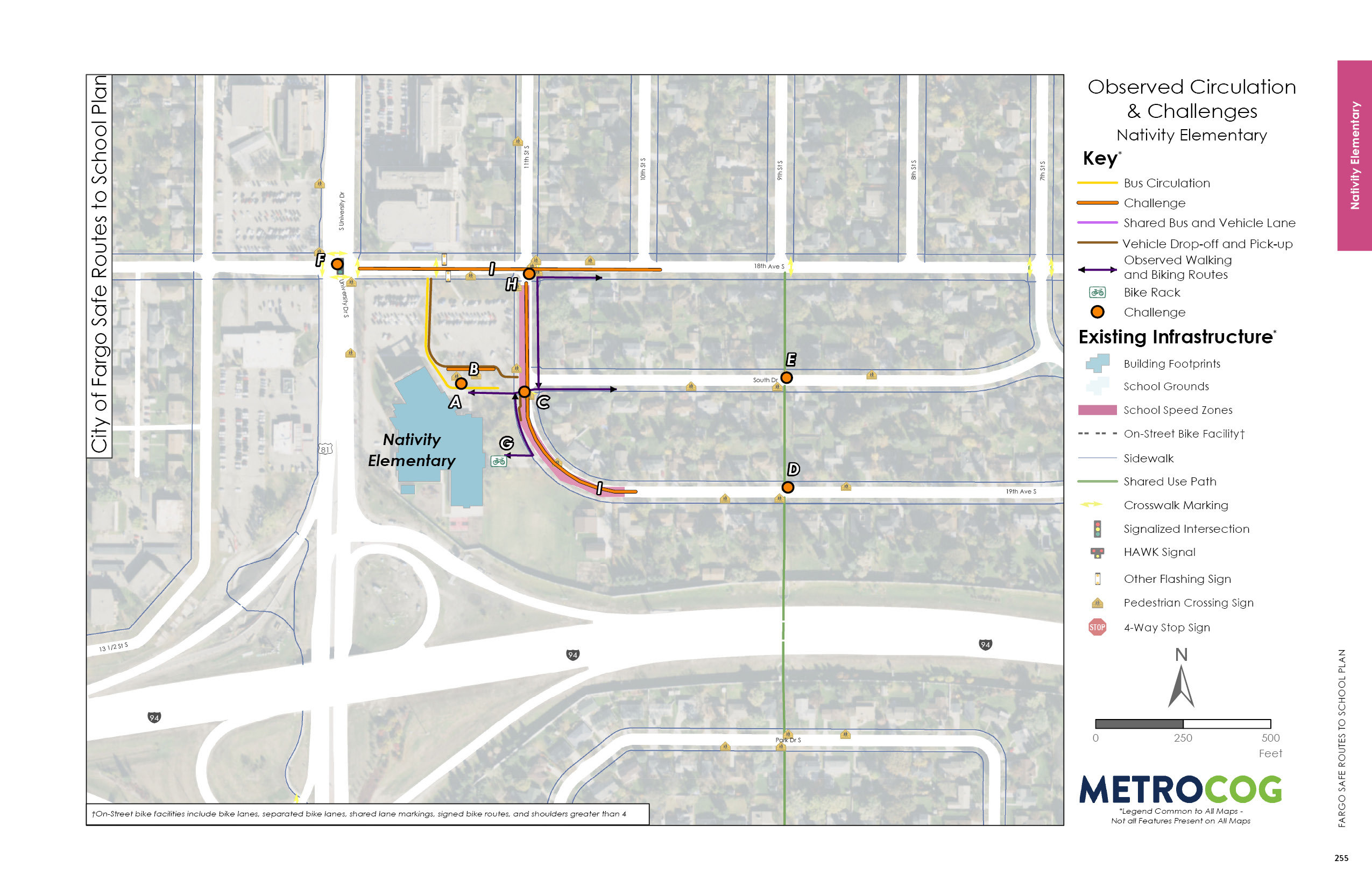 On campus, high visibility crosswalk markings are recommended between the caregiver drop-off area and the main entrance. A sidewalk along the north side of the pick-up/drop-off median is also recommended, along with ADA compliant curb ramps in alignment with designated crossing locations.

At the University Drive S/18th Avenue S intersection, crosswalk upgrades, a leading pedestrian interval, and a no turn on red restriction are recommended to increase pedestrian visibility and reduce conflicts between pedestrians and motorists. 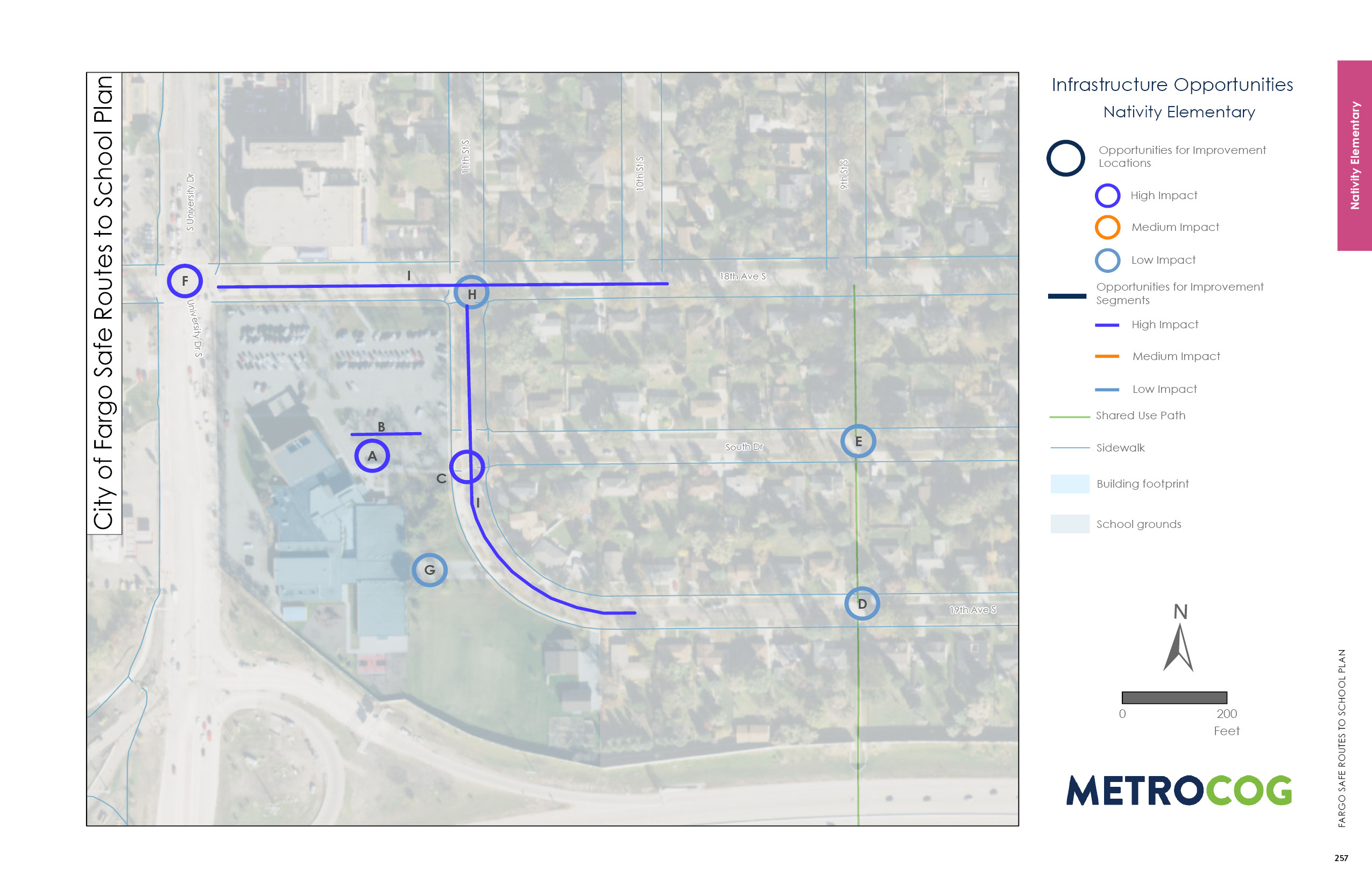 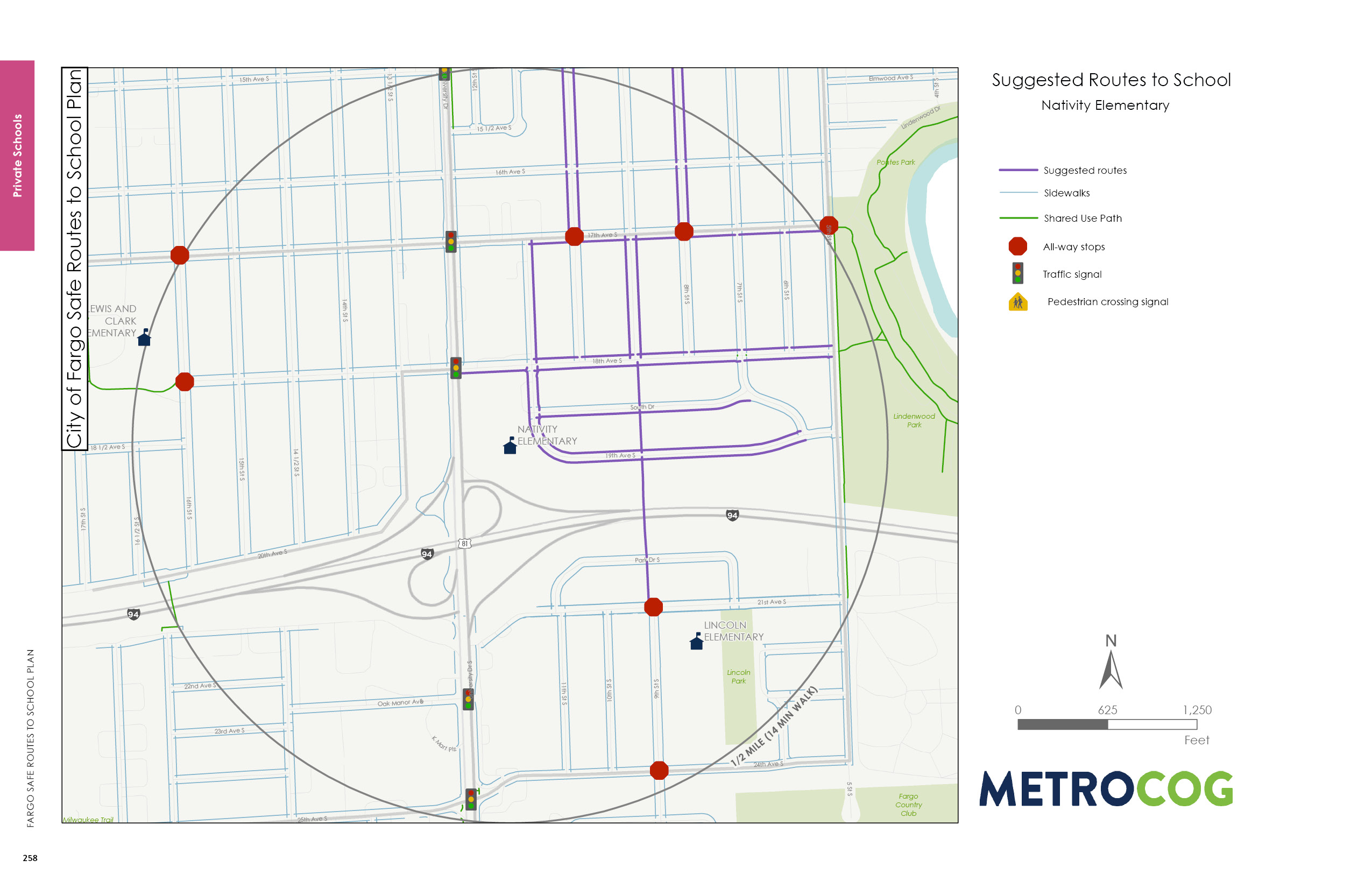 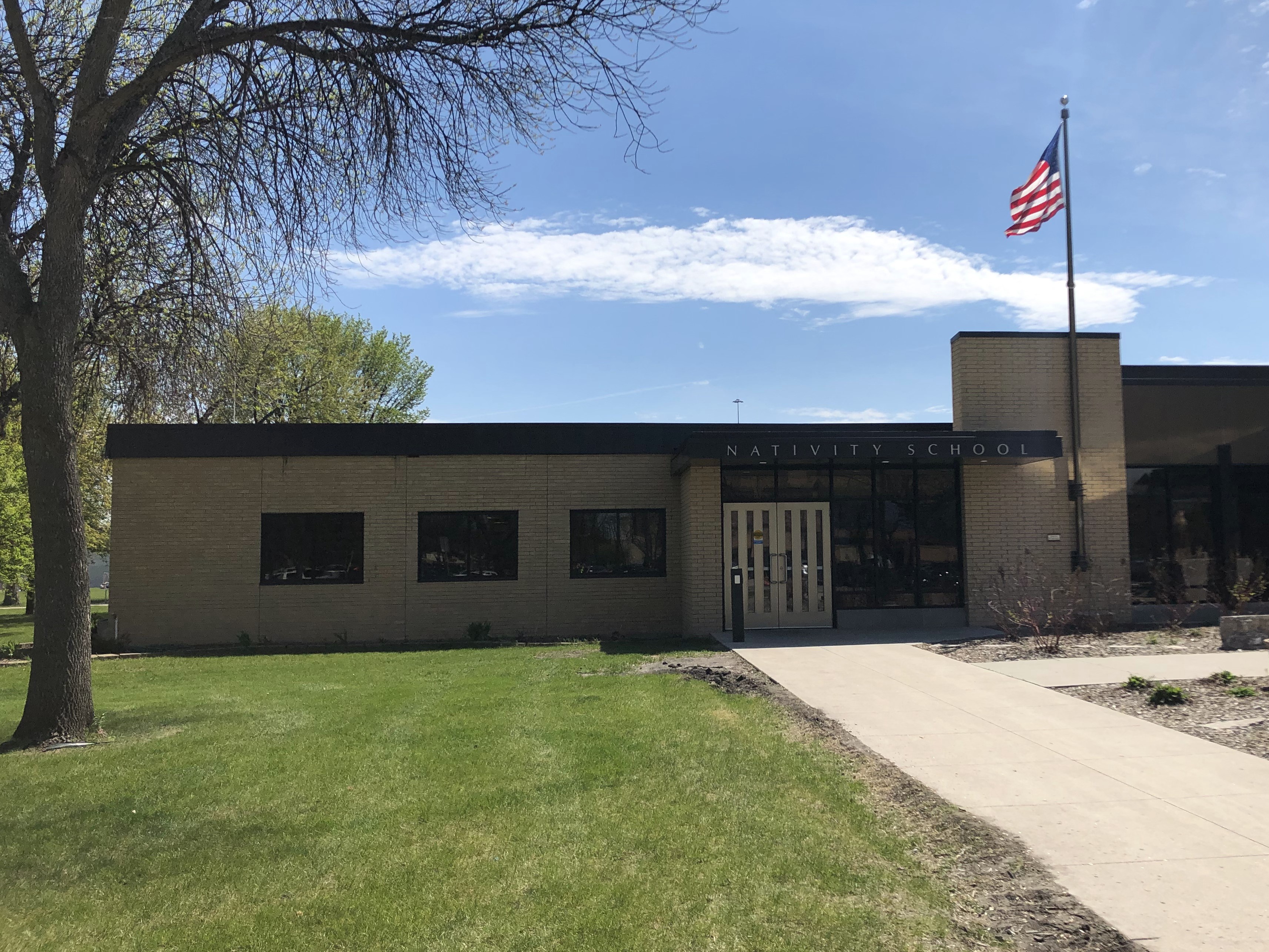 How to Get Involved at Nativity?