Lewis and Clark Elementary is a kindergarten through 5th grade school in the Fargo Public School District. It is located approximately 2 miles southwest of downtown Fargo in the city’s Lewis and Clark neighborhood and was constructed in 1954. The neighborhood consists primarily of residential land uses. Within the Lewis and Clark boundaries, per capita income is slightly lower than the district average, as well as the median household income. Forty-three percent of Lewis and Clark students are eligible for free
and reduced lunch programs. Approximately eight percent of students participate in English Language Learners programs. 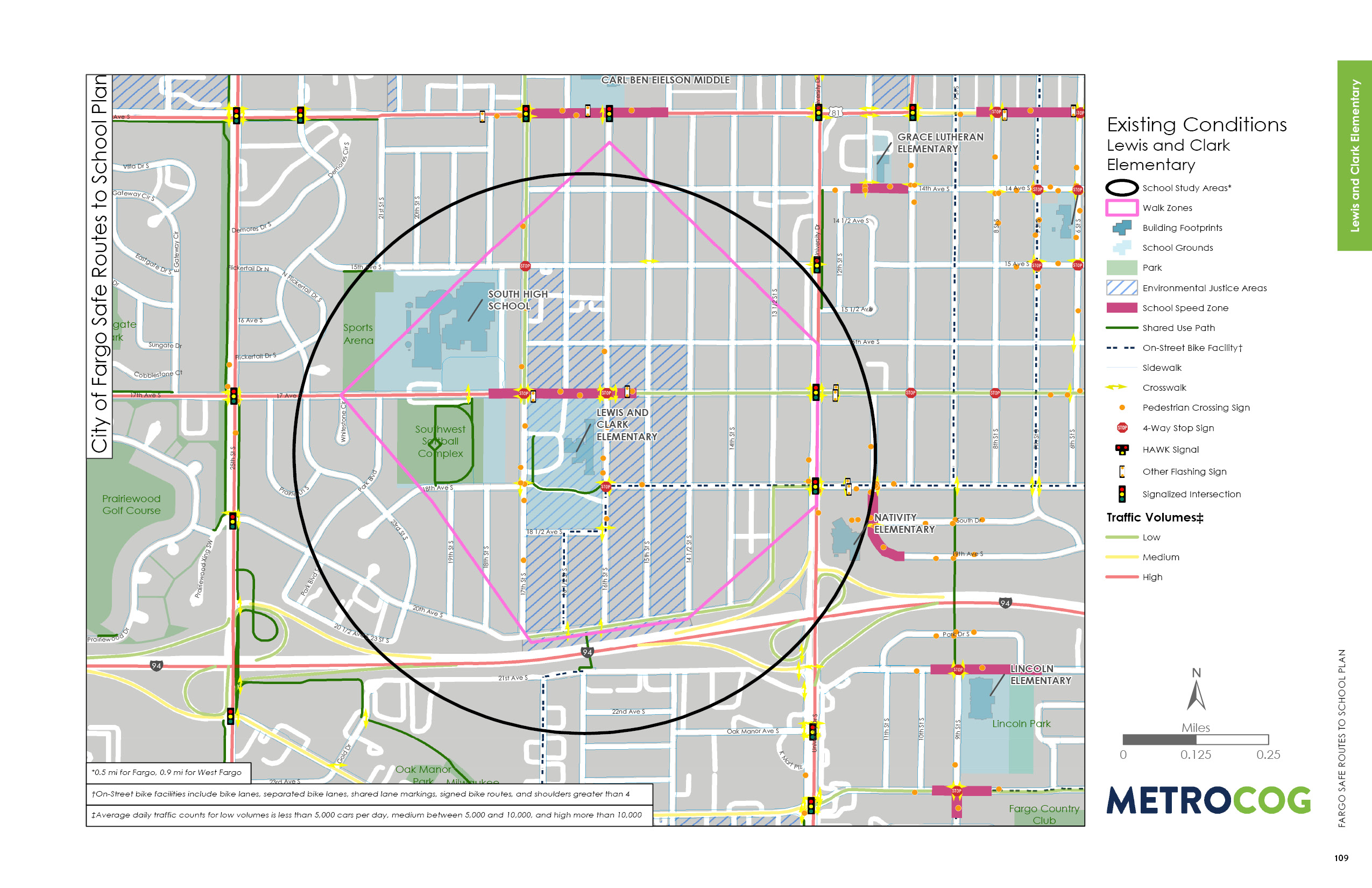 The Lewis and Clark neighborhood is walkable and few barriers were identified for safe bicycle and pedestrian access to the school.

17th Avenue S is the primary east-west circulation route for pedestrians, bicyclists, and drivers. It is a wide roadway, which creates multiple north-south crossing challenges. Students were observed crossing at the intersection of 16 ½ Street S and 17th Avenue S, but because 16 ½ Street S does not continue south of 17th Avenue S, drivers do not expect to see students. One student
was observed waiting several minutes to cross from south to north at this location until vehicles finally stopped. The pedestrian connection from this location onto campus is inadequate, as students must walk along the existing driveway to access the school.

16th Street S is the primary north-south circulation route along the west side and the vehicle drop-off and pick-up location for parents and caregivers. On 16th Street S between 17th Avenue S and 18th Avenue S, sidewalk heaving was noted during observations.

There is no sidewalk from the school along the bus loop exit to 17th Street S. Students must walk in the bus and vehicle drive aisles along the north and west side of the campus to reach sidewalks along the perimeter of campus.

Drivers have been observed driving between the bus loop and the west parking lot through the narrow space connecting the two. Students often play in this area during and after school. This vehicle movement could be in conflict with people using the area. 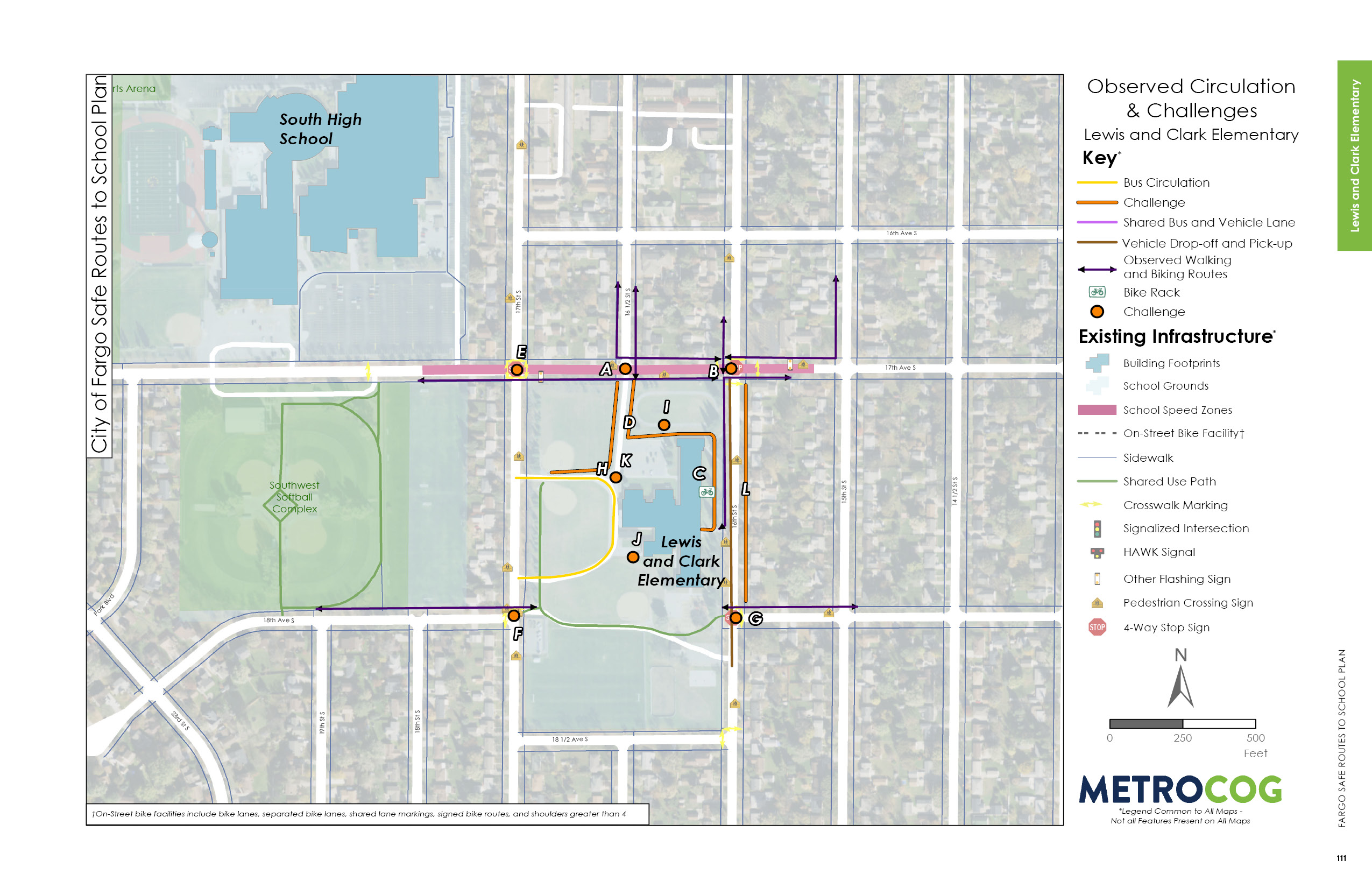 The surrounding roads are relatively calm, so improvements should be focused on improving crossings of 17th Avenue S by shortening the crossing distances, improving visibility, and calming traffic speeds. Improvements should be prioritized at 16 ½ Street S, due to the low yielding compliance observed by drivers in the area. It isn’t obvious to drivers that people may be crossing here, and anything to highlight this crossing would likely improve visibility and clarity.

On campus, it is important to provide separated space for students walking to the crossing of 16 ½ Street S and 17th Avenue S. A separated space should be installed parallel to the driveway to the north, and also along the driveway to the west side of campus. Any intersections of these circulation routes and bus or vehicle travel lanes should be highlighted using signage and/or paint. Additionally, jersey barriers should be installed to restrict access between the bus loop and the west parking lot. 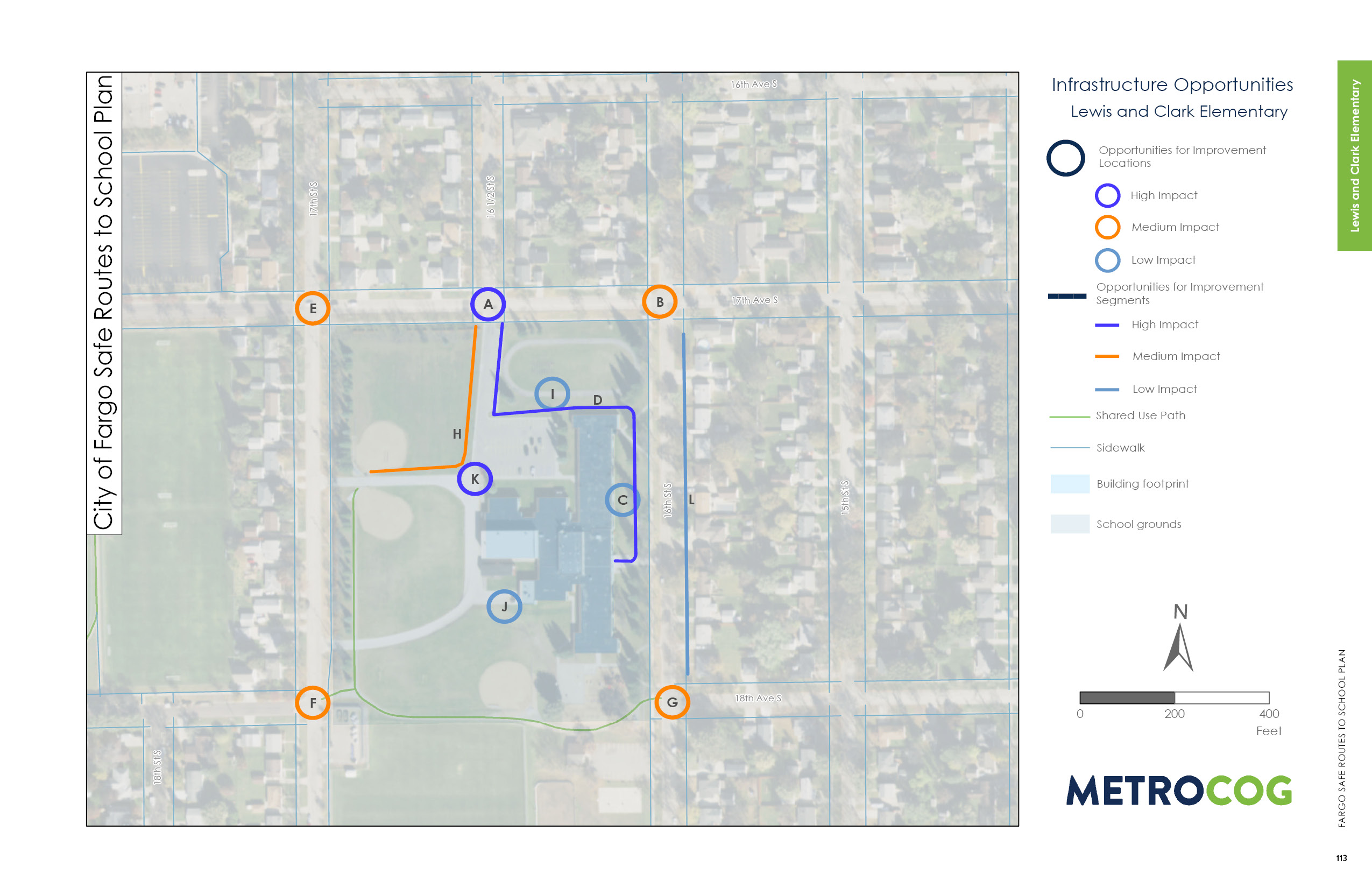 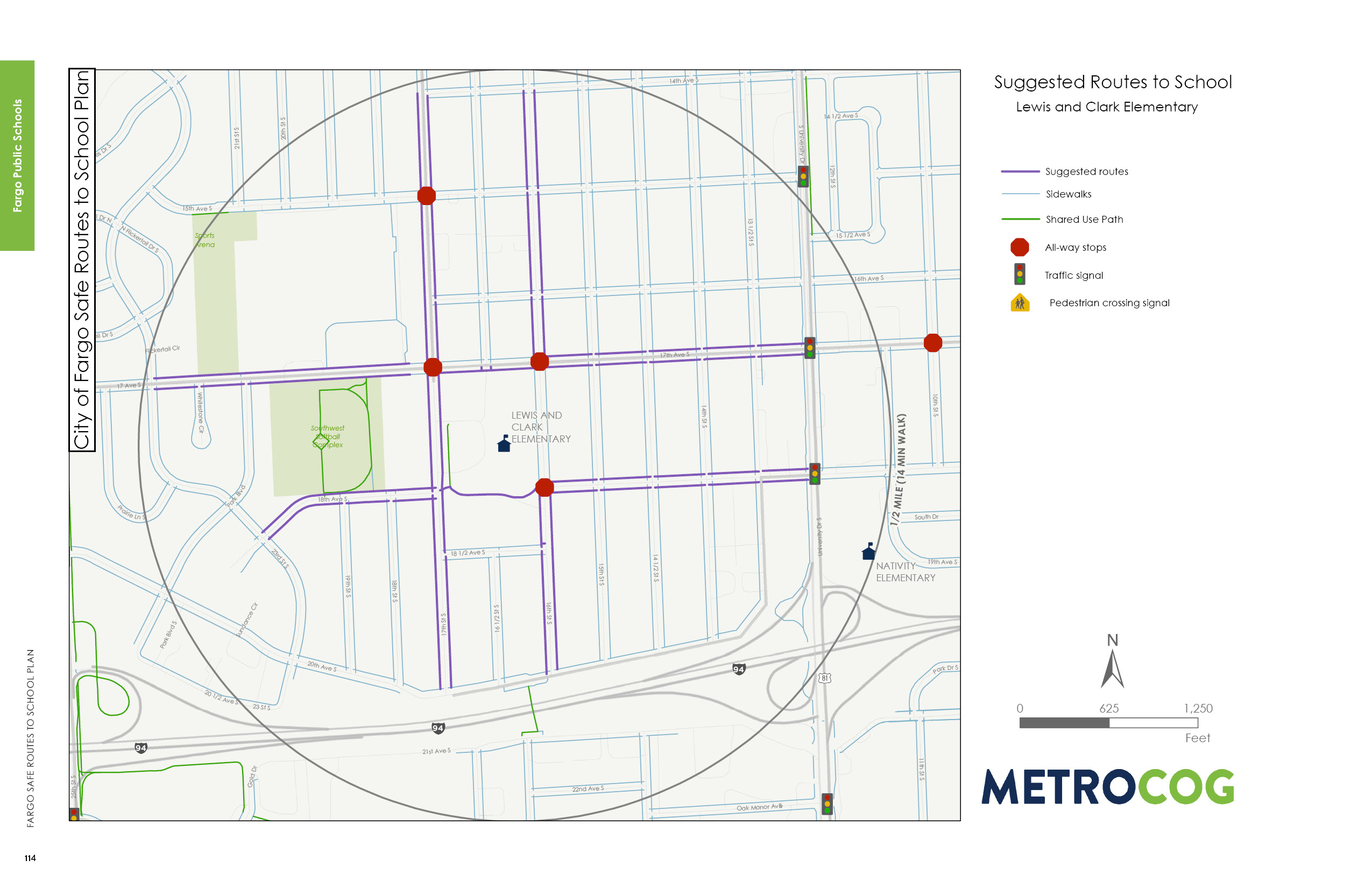 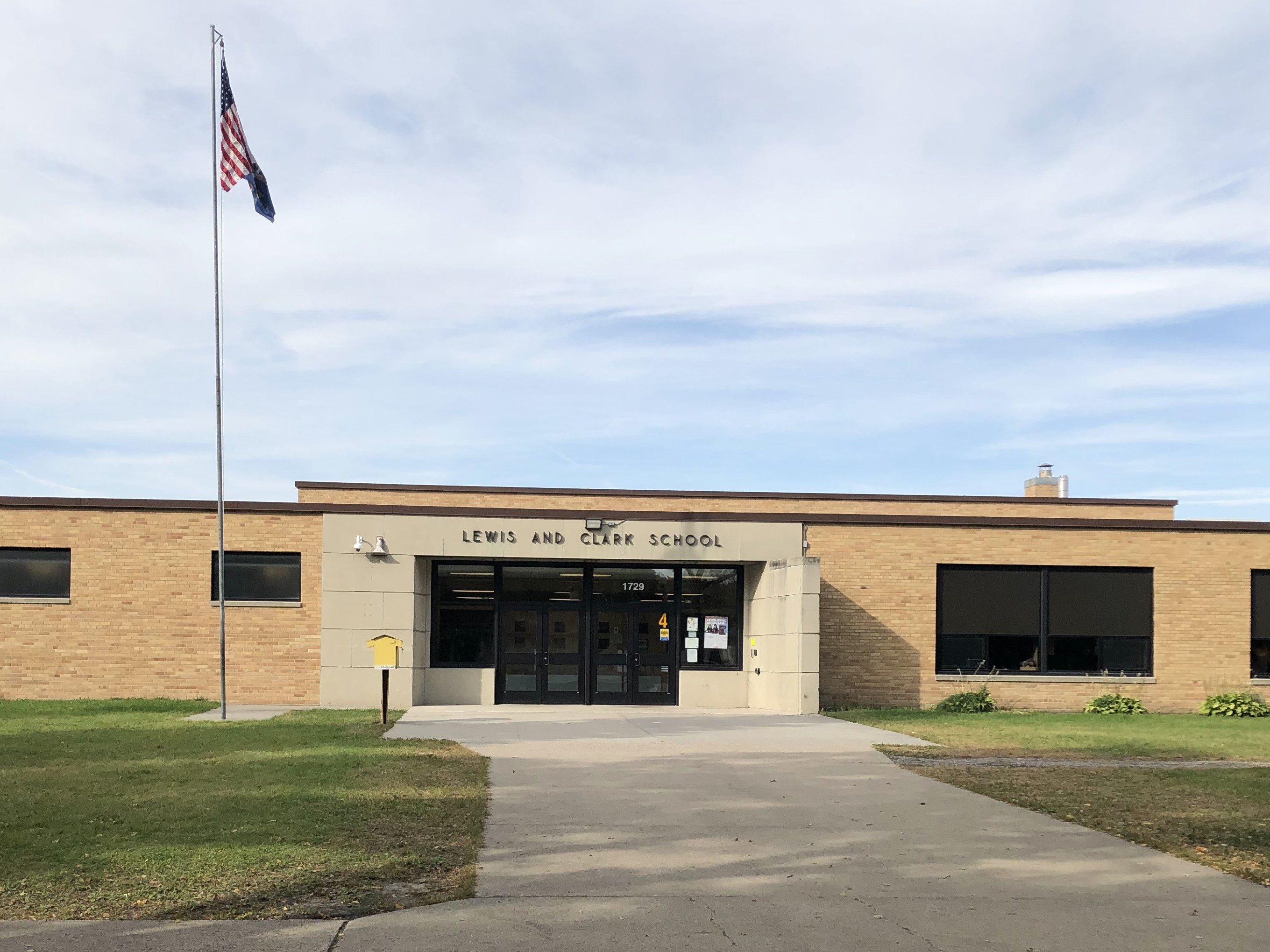