Kennedy Elementary is a kindergarten through 5th grade school in the Fargo Public School District. It is located approximately five miles southwest of Downtown Fargo in the city’s Woodhaven Neighborhood. The neighborhood consists primarily of residential single-family and commercial land uses. Within the Kennedy boundaries, the per capita income is slightly higher than the district average and the median household income is the third highest in the district. Nearly 24 percent of students are eligible for free and reduced lunch programs. More than 11 percent of students participate in English Language Learners programs.

The Kennedy school facility was constructed in 2006. In 2011, eight additional classrooms were constructed. The campus is bound by Woodhaven North Park to the west, 44th Avenue S to the north, 42nd Street S to the east and a drain just north of 47th Avenue S to the south. 42nd Street S is a medium traffic volume roadway with observed speeding through the school zone. The Fargo Public School District identifies 42nd Street S as a barrier for students walking or biking to Kennedy Elementary. 44th Avenue S and Woodhaven Drive S are low traffic volume local roadways with observed speeds higher than the posted speed limit of 25 miles per hour. A designated school speed zone is located on 42nd Street S between 44th Avenue S/Great Plains Drive and the southern edge of the campus. Along 44th Avenue S between Woodhaven North Park and 42nd Street S there is also a school speed zone. There are sidewalks on both sides of the roadways throughout most of the walk zones.

On campus, there is a bike rack located at the main entrance between the bus and parent drop-off aisles. It is a comb style rack that does not allow for locking of the frame and can result in wheel damage. 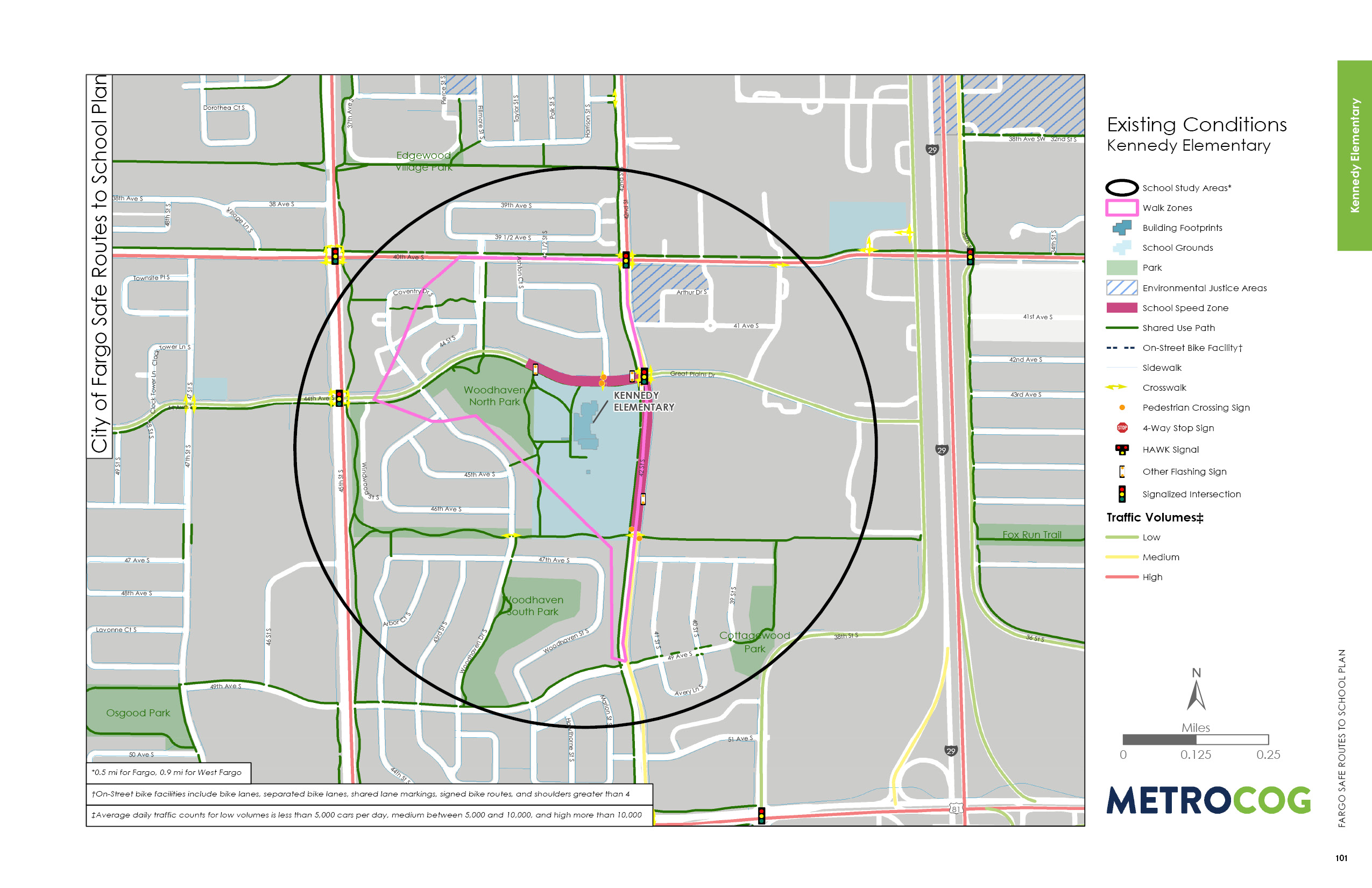 Along 42nd Street S, free flow right turns into the drop-off loop could conflict with bicyclists crossing the driveway from the south to access the bike racks. At the vehicle dropoff and pick-up loop exit at 42nd Street S, drivers consistently blocked the crosswalk and were observed having poor yielding behavior to pedestrians and bicyclists.

A number of trails connect students who live northwest, west, and south of Kennedy from the neighborhoods to campus; however, there is not a direct or continuous route from the trails to Kennedy’s main entrance. Younger students have an especially challenging time traversing curbs and navigating parent traffic on the south side of Kennedy Elementary. 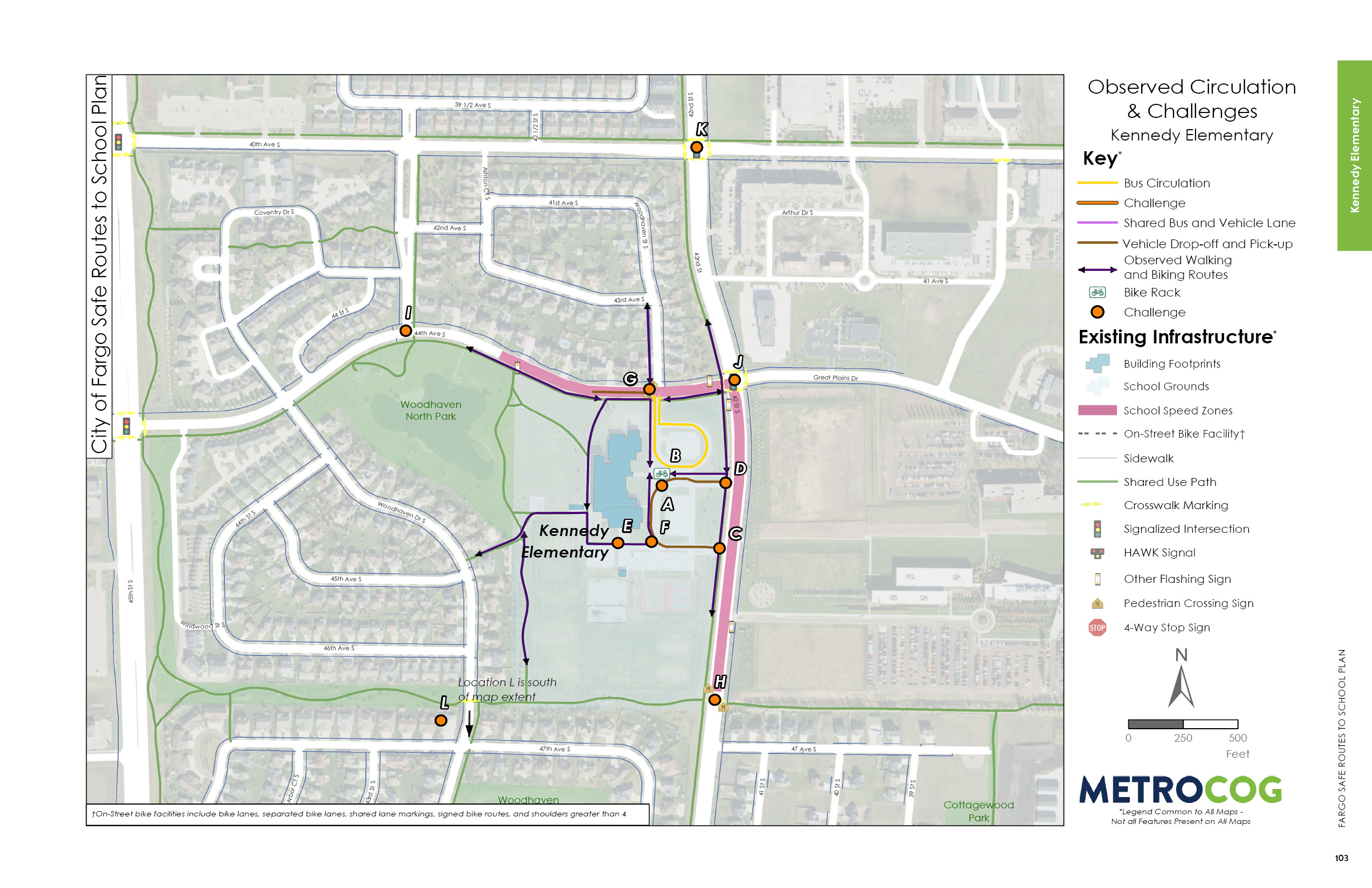 High impact opportunities for improvement at Kennedy Elementary are located on campus. There are great trail connections to Kennedy from the neighborhood west and south of the school, but the connection the main entrance poses the greatest challenge to students, especially the youngest bicyclists.

Curb ramps and a continuous separated route from the trail to the sidewalk in the parent loop will allow students to stay on their bikes and avoid conflicts with parents exiting the loop.

Other opportunities for improvement include pedestrian and bicycle crossings at parking lot driveways including reducing crossing distances, installing high visibility crosswalk markings, and raising crosswalks
to elevate trail users and discourage motorists from blocking the crosswalk.

Curb extensions or a median safety island and consideration for an RRFB are recommended at Woodhaven Street S and 44th Avenue S to mitigate challenges including poor visibility and driver yielding behavior. 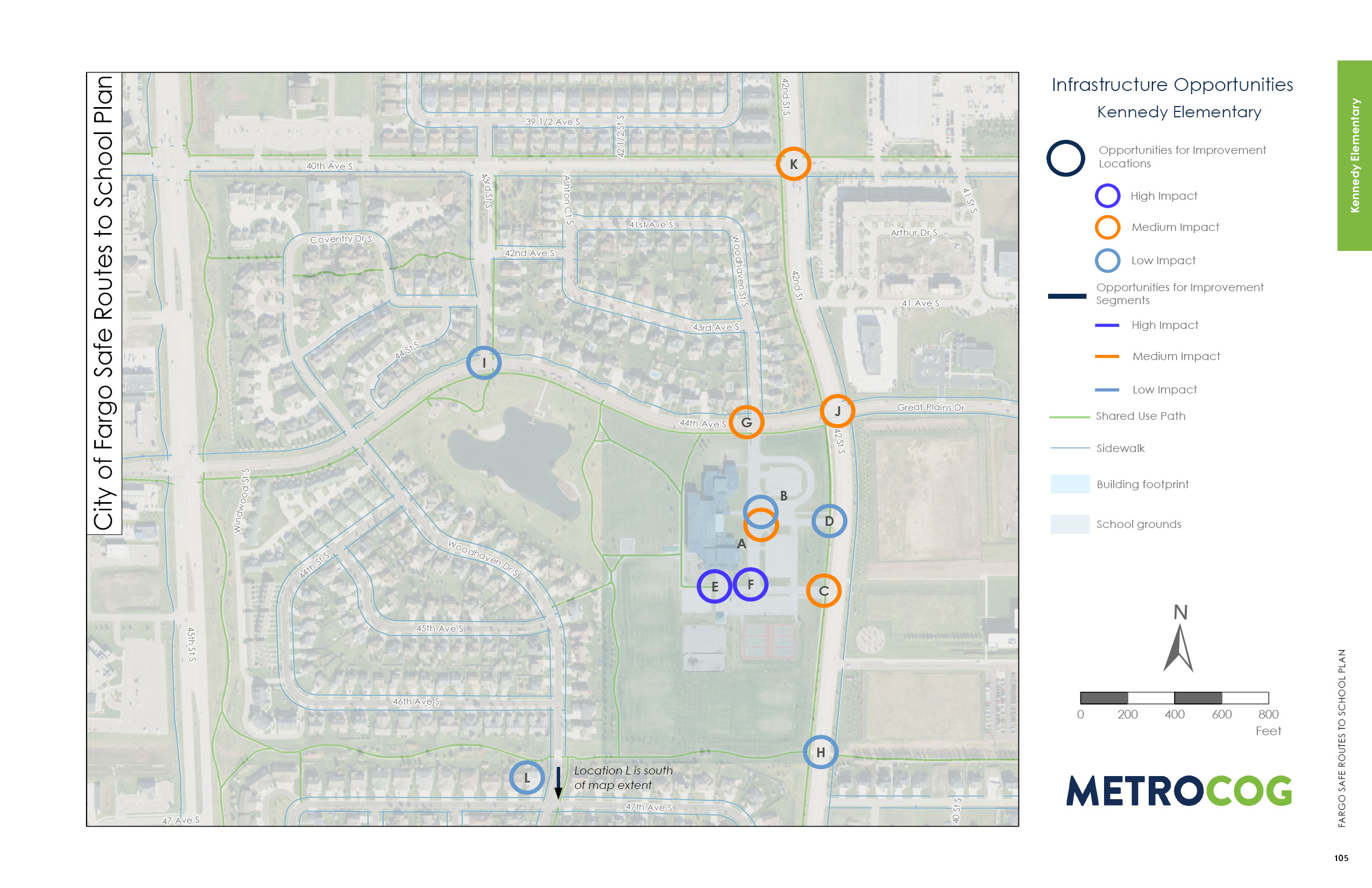 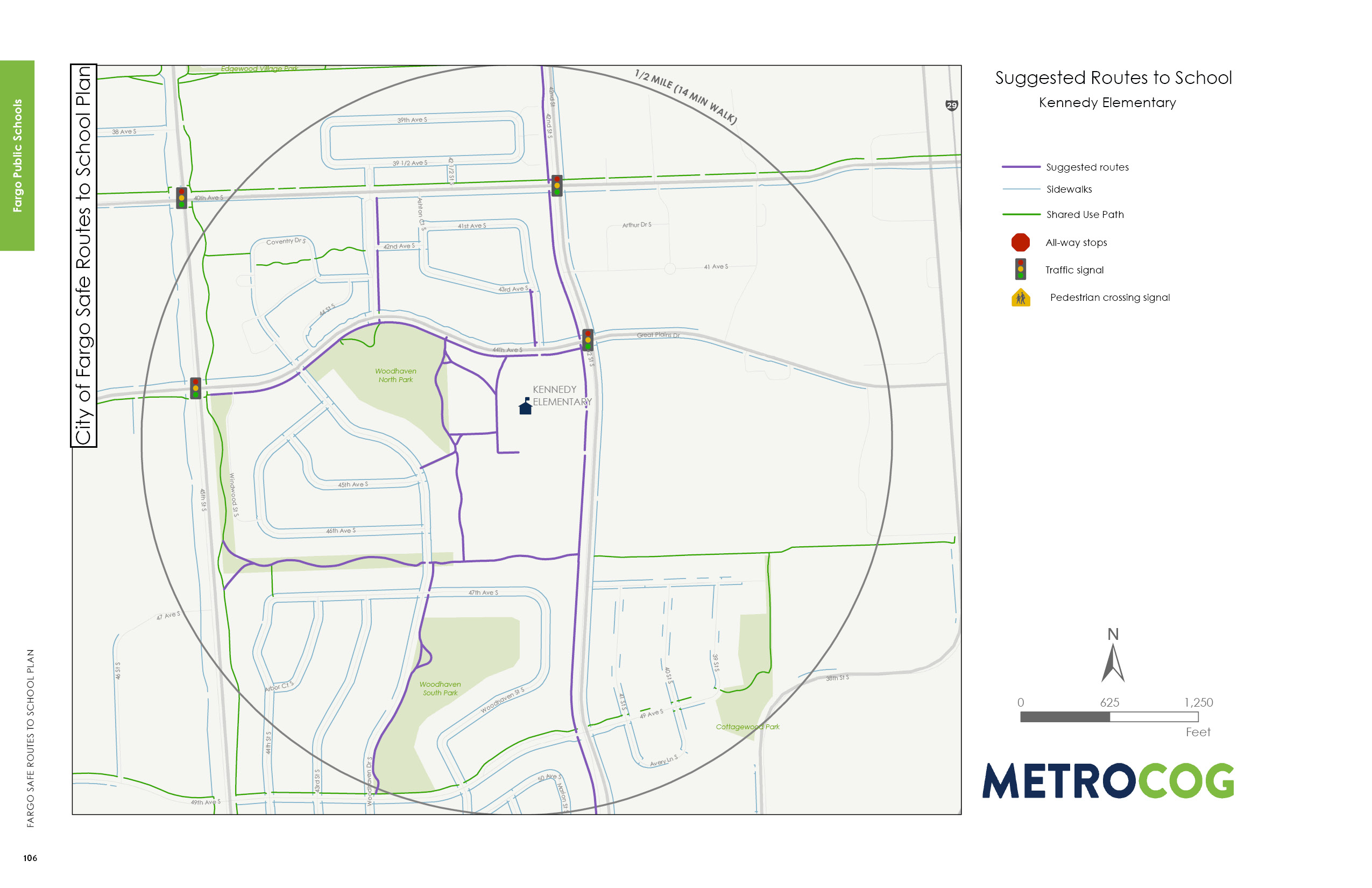 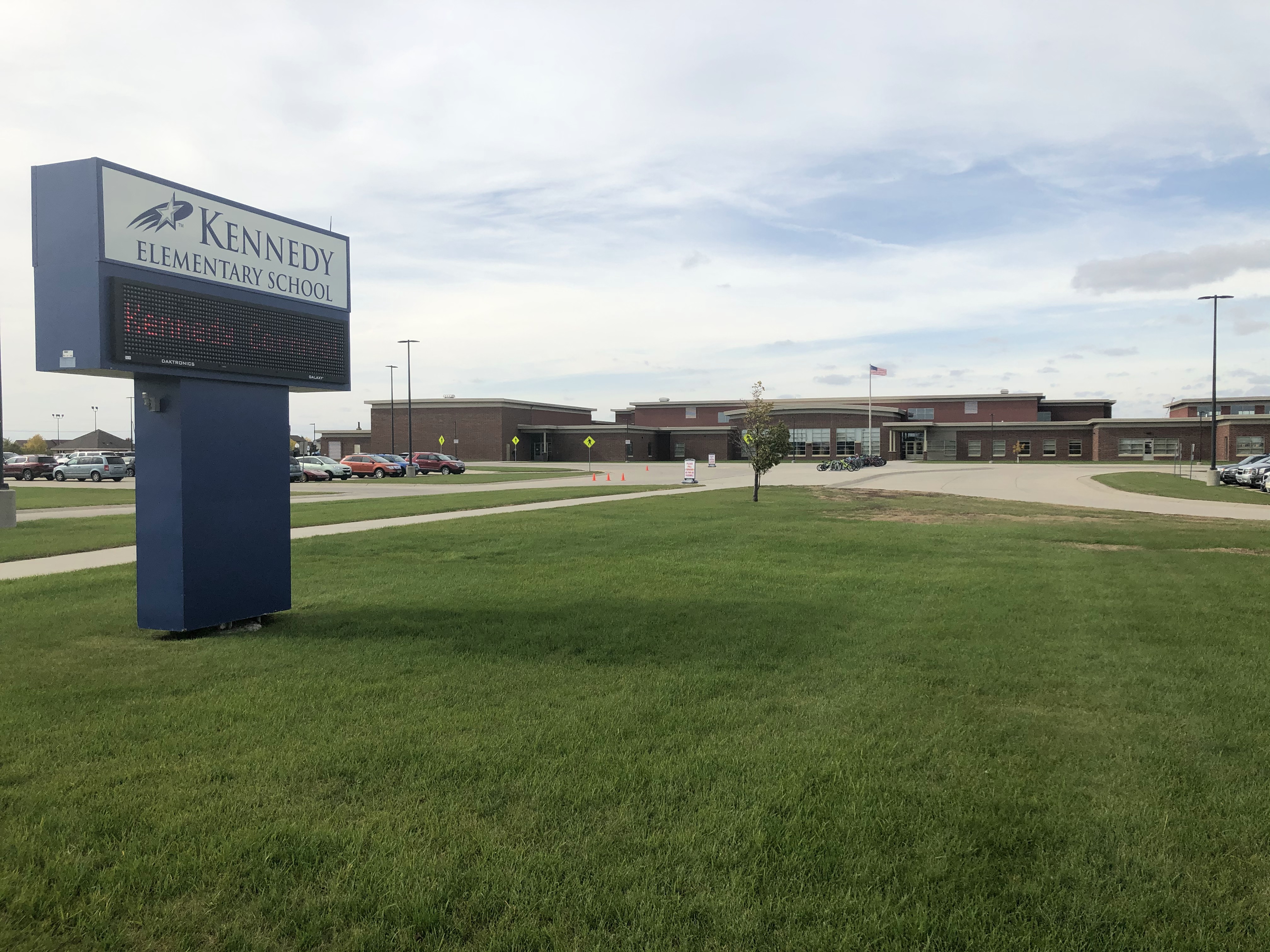 How to Get Involved at Kennedy?