The school was constructed in 2014. The school is bound by Valley View Park to the north, 50th Street S to the east, 38th Avenue S to the south, and 54th Street S to the west. The roads surrounding the building consist of local roads with primarily localized traffic patterns. Sidewalks are located in some areas surrounding the campus, but not all, due to the continued construction of subdivisions. 40th Avenue S, one block south of the school, is a high traffic volume road with long crossing distances but adequate pedestrian space along it. 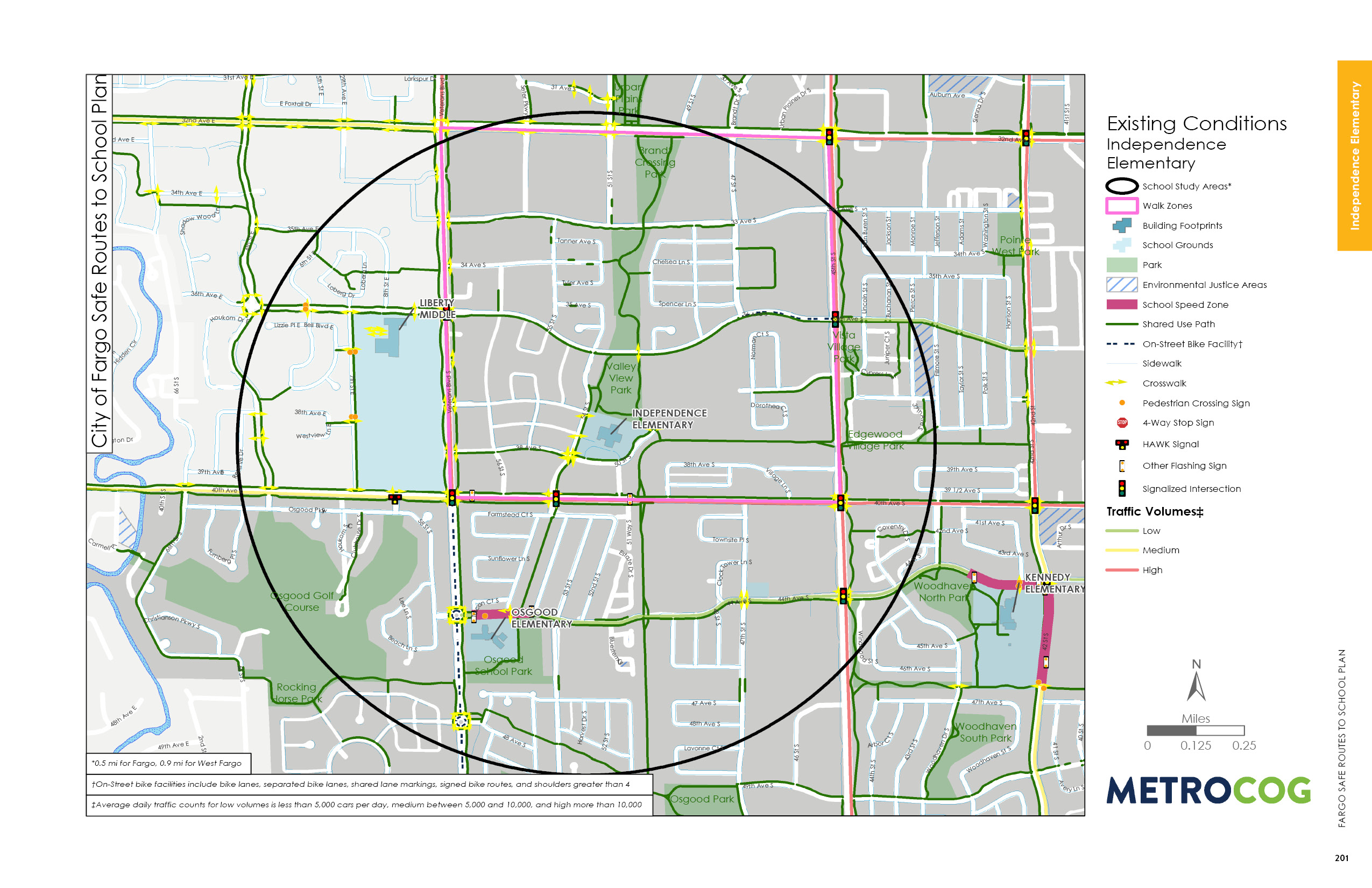 The 54th Street S corridor is the primary north-south circulation route for students. It is relatively wide and can be a barrier to students and families walking and biking to school. Installing medians or curb extensions may improve pedestrian crossing comfort and safety. The intersection of 54th Street S and 40th Avenue S is very wide, with long crossing distances. It is controlled with a traffic signal. Incorporating a leading pedestrian interval could further improve pedestrian crossing safety.

Between campus and housing to the east, there is a large drain that separates the two. There are no connections over the drain, except at 40th Avenue S, which requires students to take a circuitous route to get to the trail that runs behind the school building. Additional concerns were noted by parents and students in this area during the winter months, specific to snow and wind.

On campus, there are no separated pedestrian circulation routes along the bus loop towards 40th Street S. The campus also lacks a direct pedestrian and bicycle connection between the intersection of 38th Avenue S and 54th Street S and the front door. Students were observed cutting through the grass to access the school building.

A high-quality network of shared use paths exists in the area immediately to the north of the school and along 54th Street S, but connecting to them from the west side of school can be a challenge. Students were observed traveling through the parking lot to reach the shared use paths. 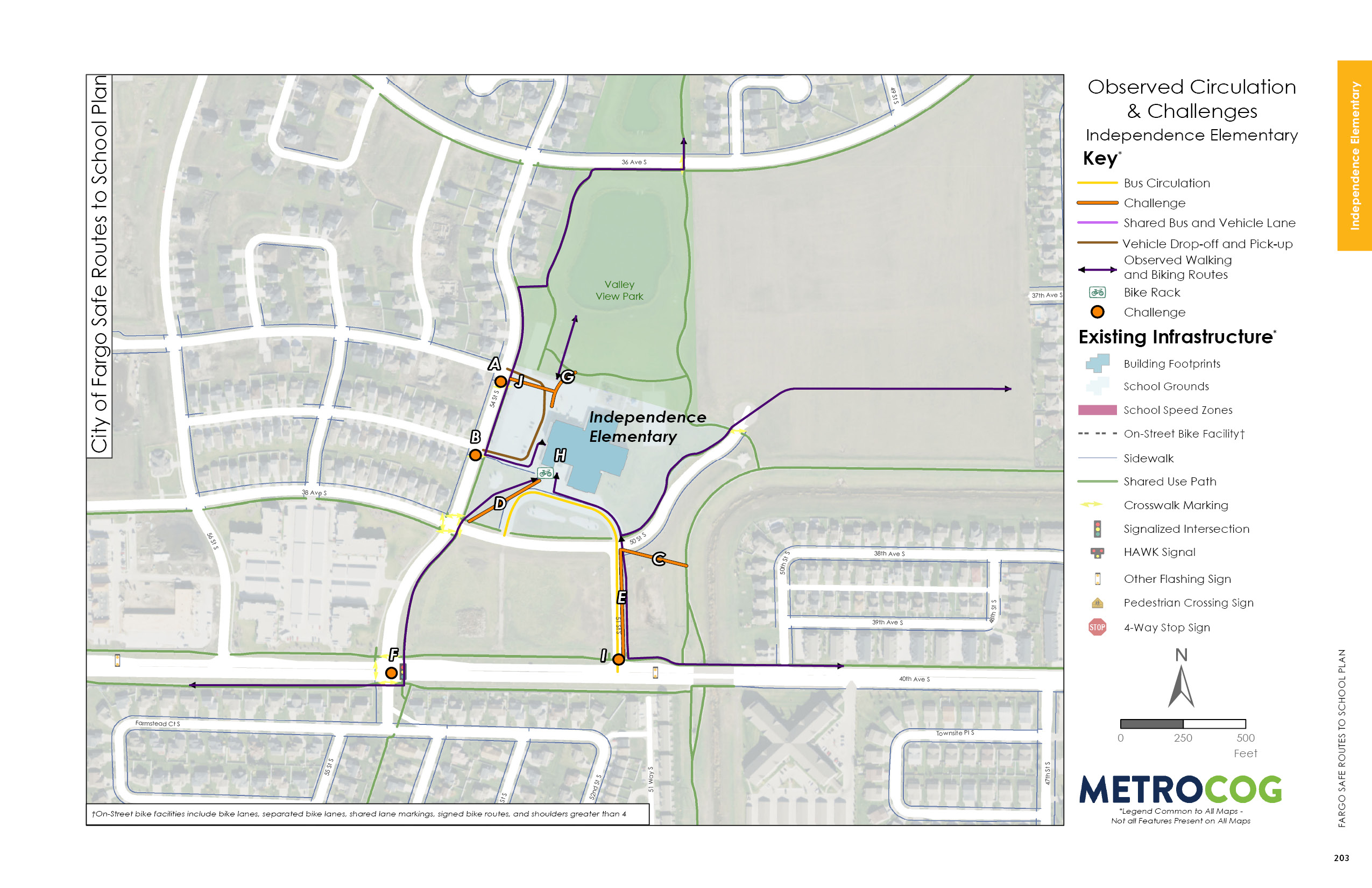 Connections to the developing neighborhoods west of 54th Street S are high impact opportunities for improvement. Shortening the crossing distances and calming traffic along the segment of 54th Street S bordering the school would provide more comfortable routes for students and families walking and biking to school. There may be an opportunity to remove the existing center turn lane and use that space as a refuge island for people walking and biking, or to calm traffic.

Additionally, the connections on campus to the surrounding neighborhoods could be improved by installing sidewalks and in particular, a pedestrian bridge over the existing drain to the east of the school. Campus connections across parking lots and driving spaces to the existing shared use path network should also be prioritized. 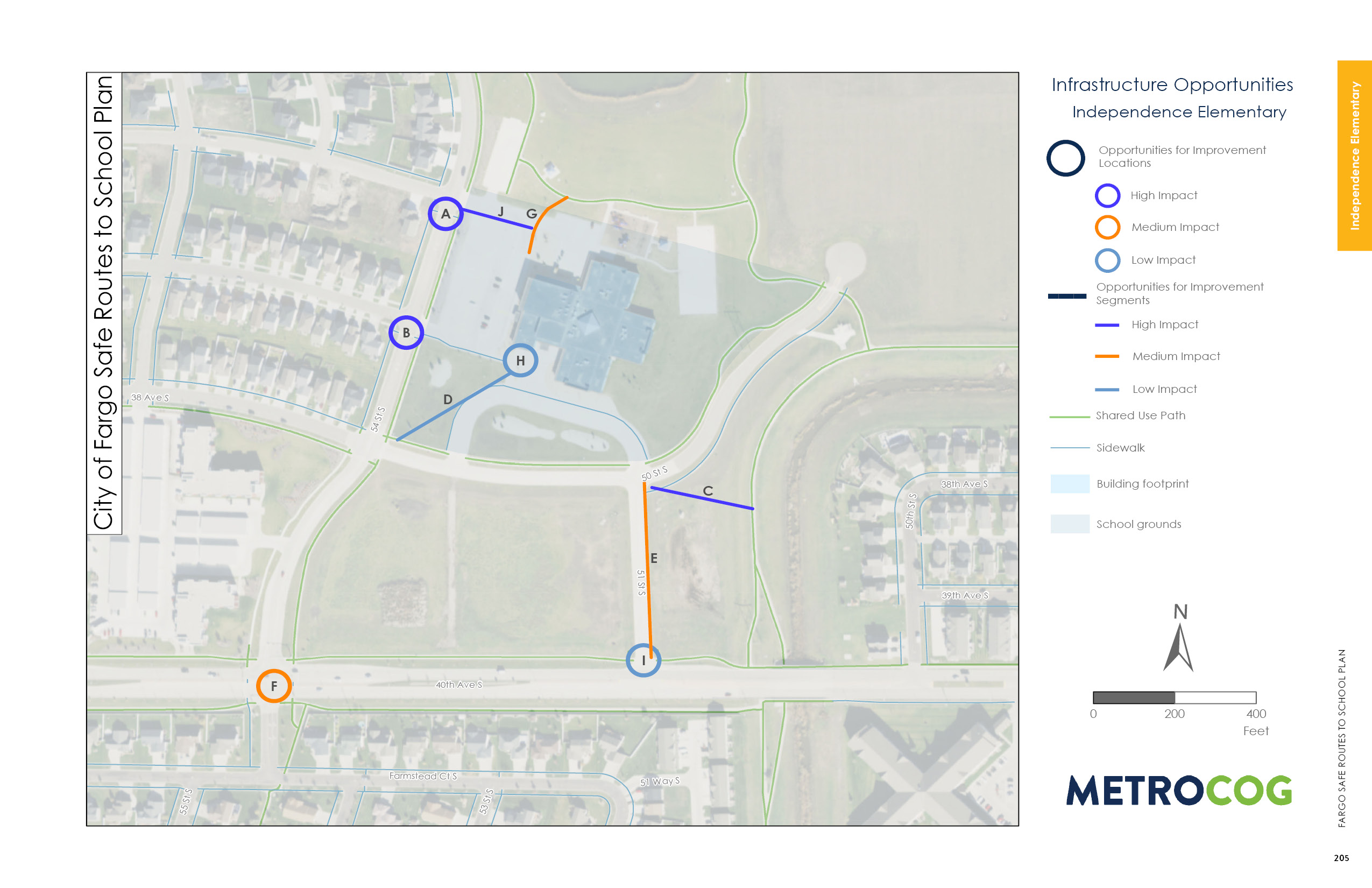 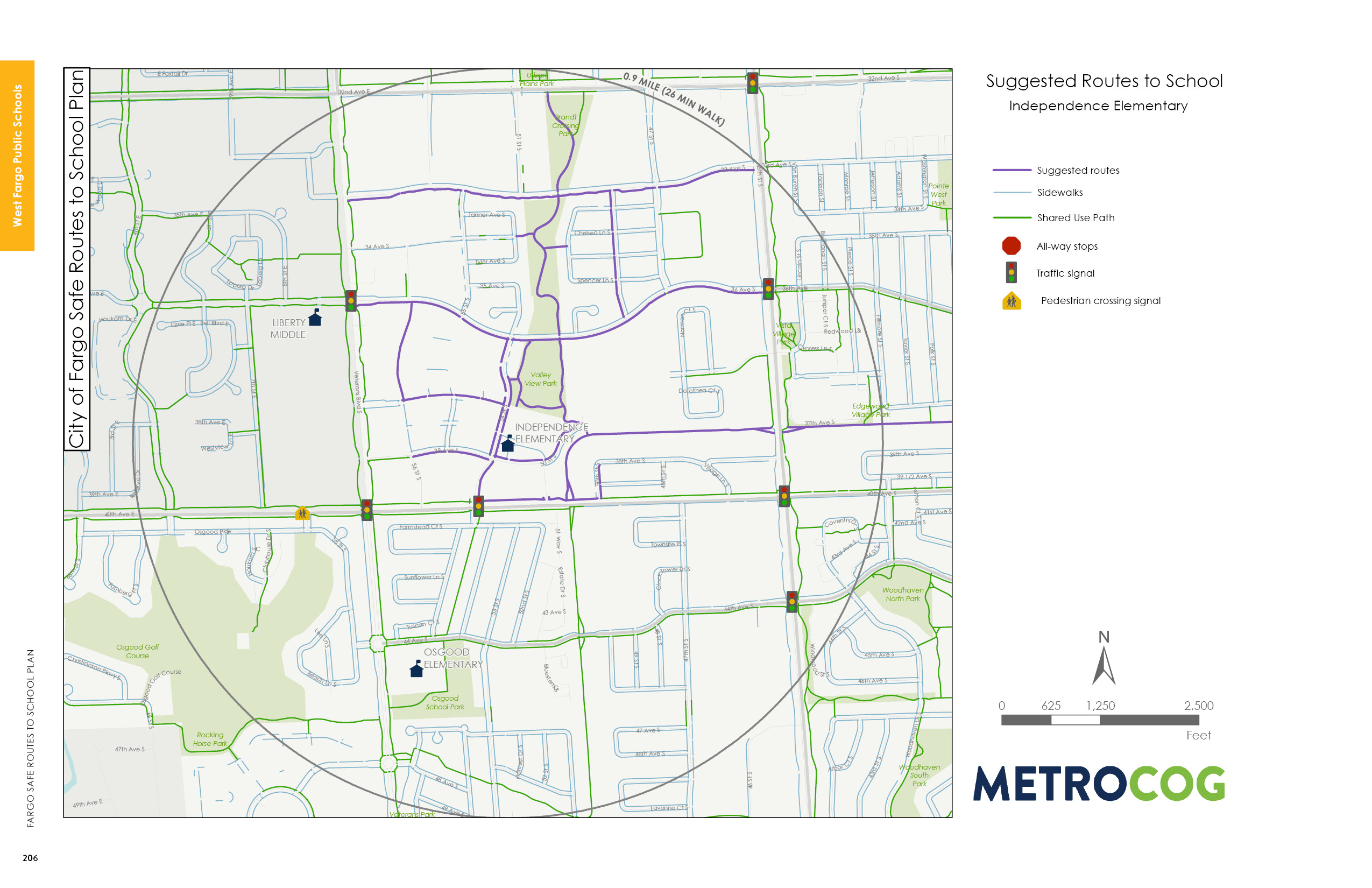 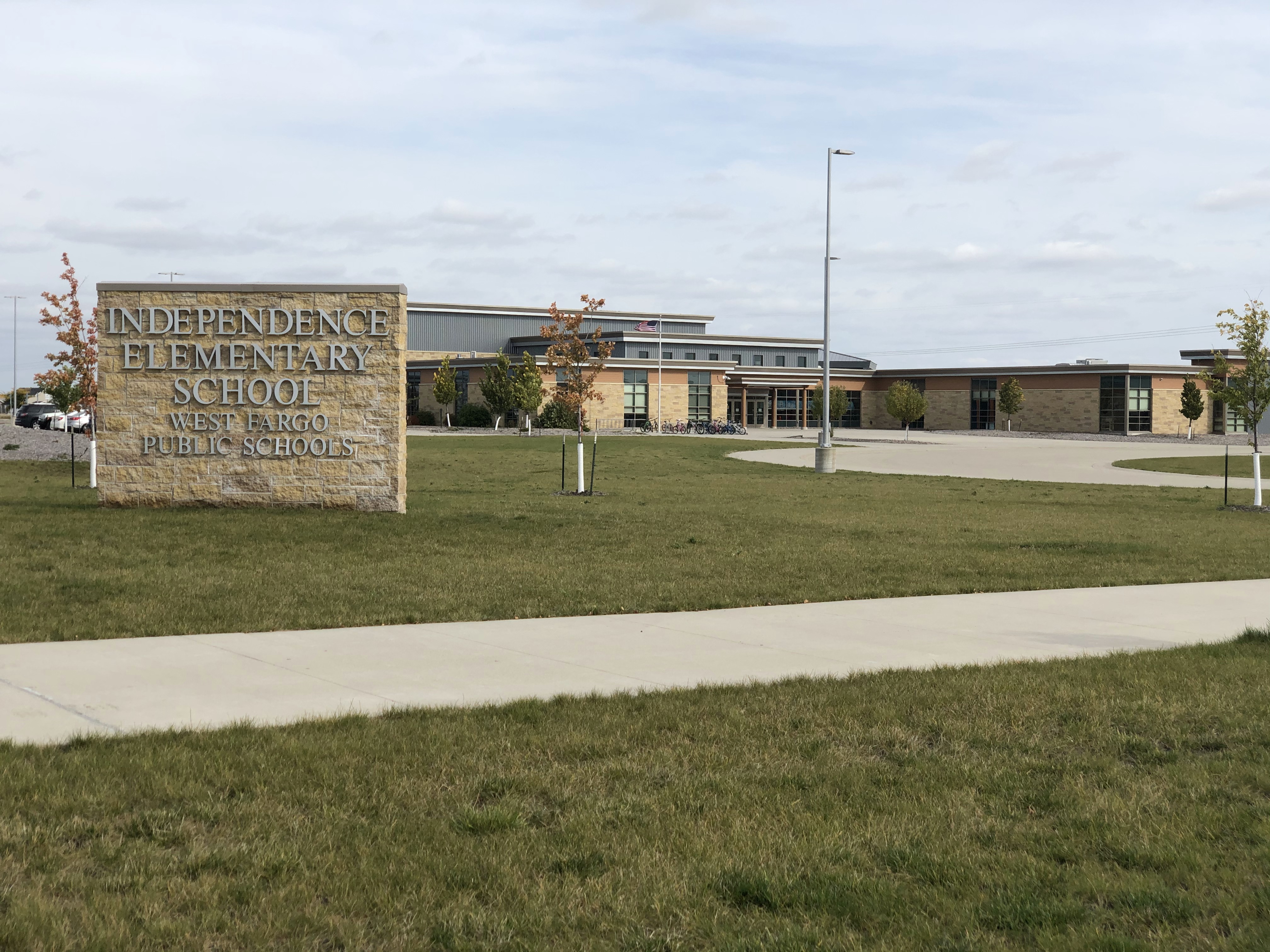 How to Get Involved at Independence?