Hawthorne Elementary is a kindergarten through 2nd grade school in the Fargo Public School District. It is located just under one mile south of Downtown Fargo in the city’s Hawthorne Neighborhood. The neighborhood consists primarily of residential land uses. Within the Hawthorne boundaries, per capita income is slightly higher than the district average, but median household income is slightly less. Nearly one-quarter of Hawthorne’s students are eligible for free and reduced lunch programs. Less than one percent of students participate in English Language Learners programs. 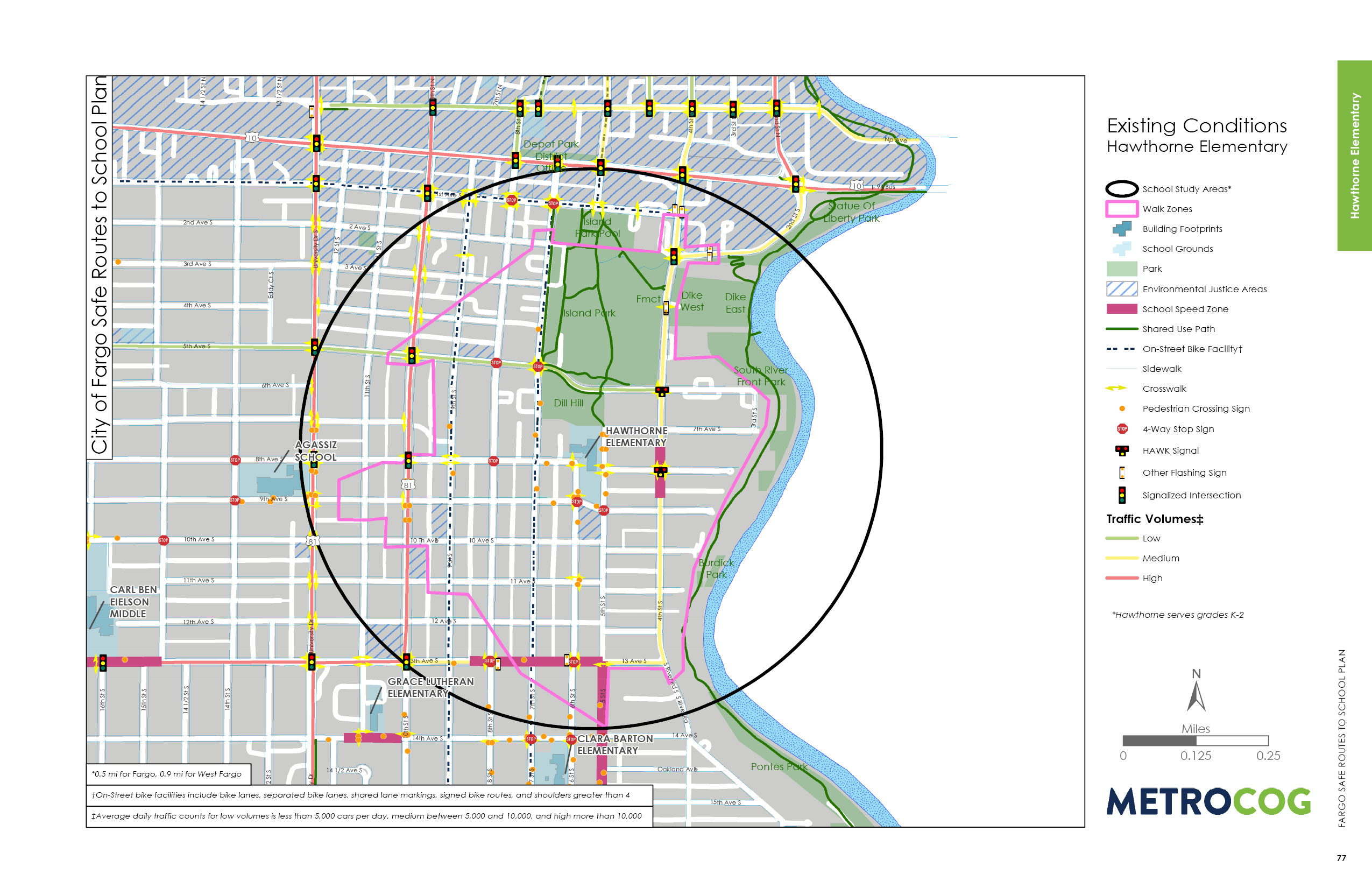 Given its location in a walkable neighborhood, Hawthorne students and families cross relatively low traffic and low speed roads. Field observations indicated a large share of students biking and walking to the school site, many with an accompanying parent.

The 6th Street S corridor is viewed as a primary north-south circulation route to the campus, also providing a link to Hawthorne’s paired school of Clara Barton Elementary. The 9th Avenue S intersection is skewed and multiple intersections have inconsistent crosswalk markings.

Parents and caregivers dropping students off and picking them up creates congestion surrounding the school grounds. Parked vehicles encroach on the crosswalk space along 6th Street S and school buses encroach on the crosswalk space on 5th Street S. This creates potential safety challenges for students crossing 6th Street S and 5th Street S. Enhancing the walking and biking connections to Clara Barton Elementary should be considered and prioritized 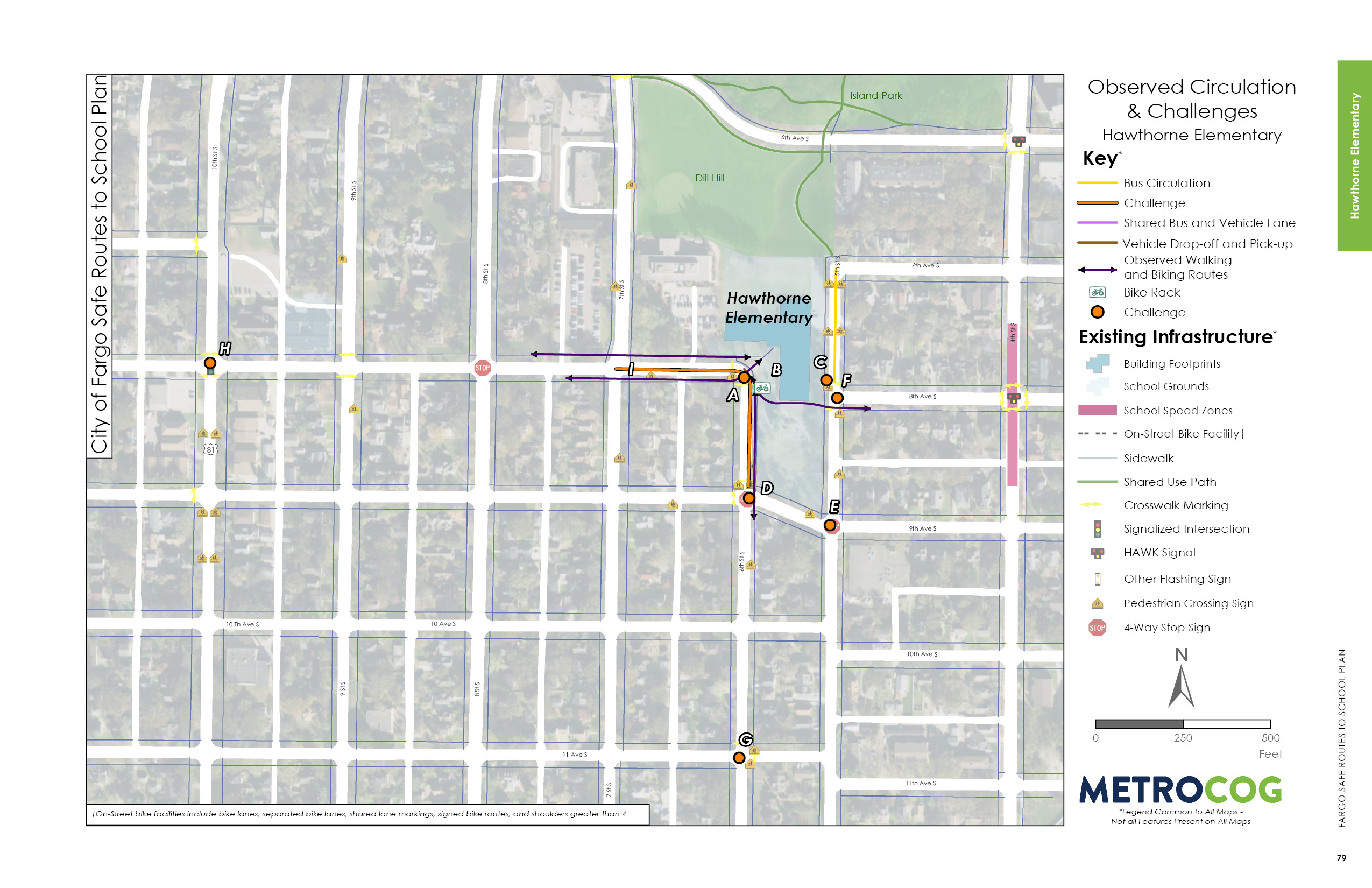 The major challenge students and families face while walking and biking to Hawthorne is the area immediately outside school on 6th Street S/8th Avenue S. The congestion and general lack of delineated space makes the area confusing and uncomfortable for anyone in the area. By installing a raised crosswalk diagonally across the intersection from the school site to the west corner, the city would provide a clear path for people walking to and from the west of school. A raised crossing would formalize and prioritize the space for people walking and visibility would improve. To further decrease confusion in this area, the city could consider limiting access only to traffic traveling north and west bound by restricting access at the intersection of 9th Avenue S and 6th Street S, effectively making this L-shaped street into a one-way north and west bound. The Hawthorne principal mentioned that the two streets were temporarily turned into a one way during a recent road construction project, and during that time, comfort for people walking and biking was improved. 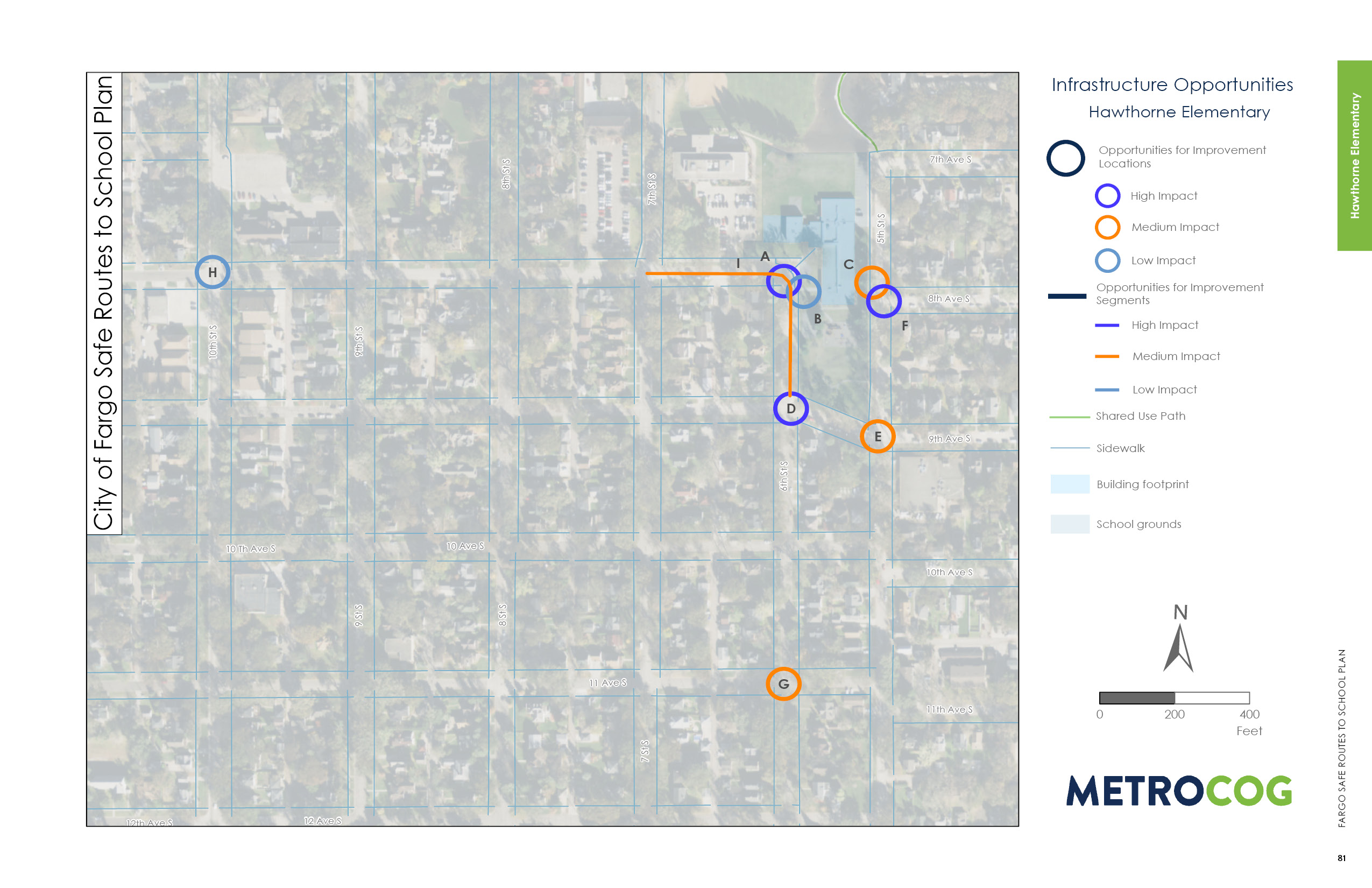 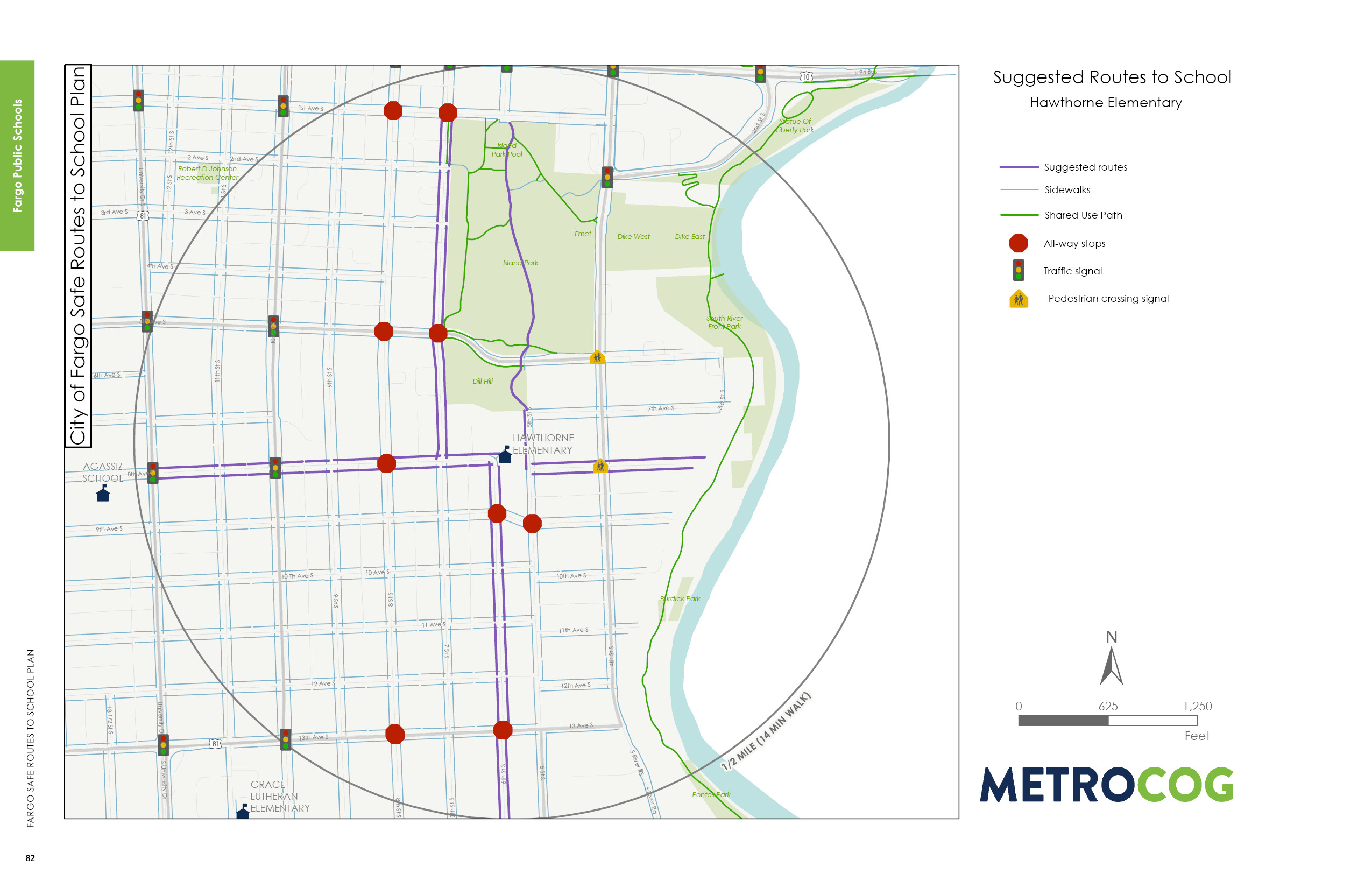 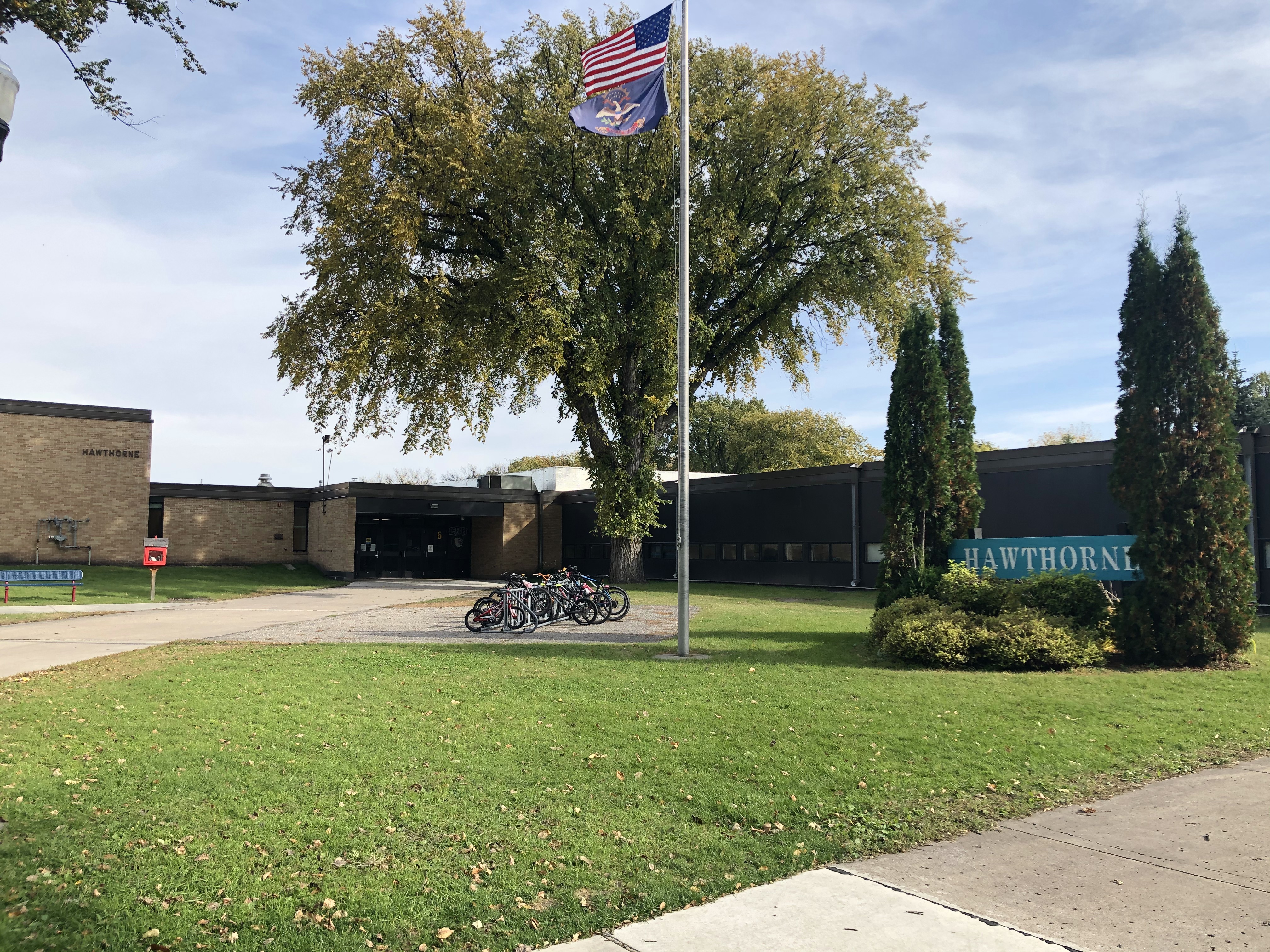 How to Get Involved at Hawthorne?