Grace Lutheran School is a private protestant school for Pre-K through 8th grade. It is located approximately 1.3 miles south of downtown Fargo in the city’s Clara Barton Neighborhood. The school is located in a mostly residential and established neighborhood of Fargo and sidewalks are present throughout the school area.

The school was constructed in 1951. The campus is bound by 14th Avenue S to the south, 11th Street S to the west, and residential housing to the east and north. University Drive one block to the west and 13th Avenue S a half block to the north are high traffic volume roadways. There is a school speed zone located on 14th Avenue S along with some pedestrian infrastructure adjacent to the school on the south side.

Currently, no students walk or bike to school. 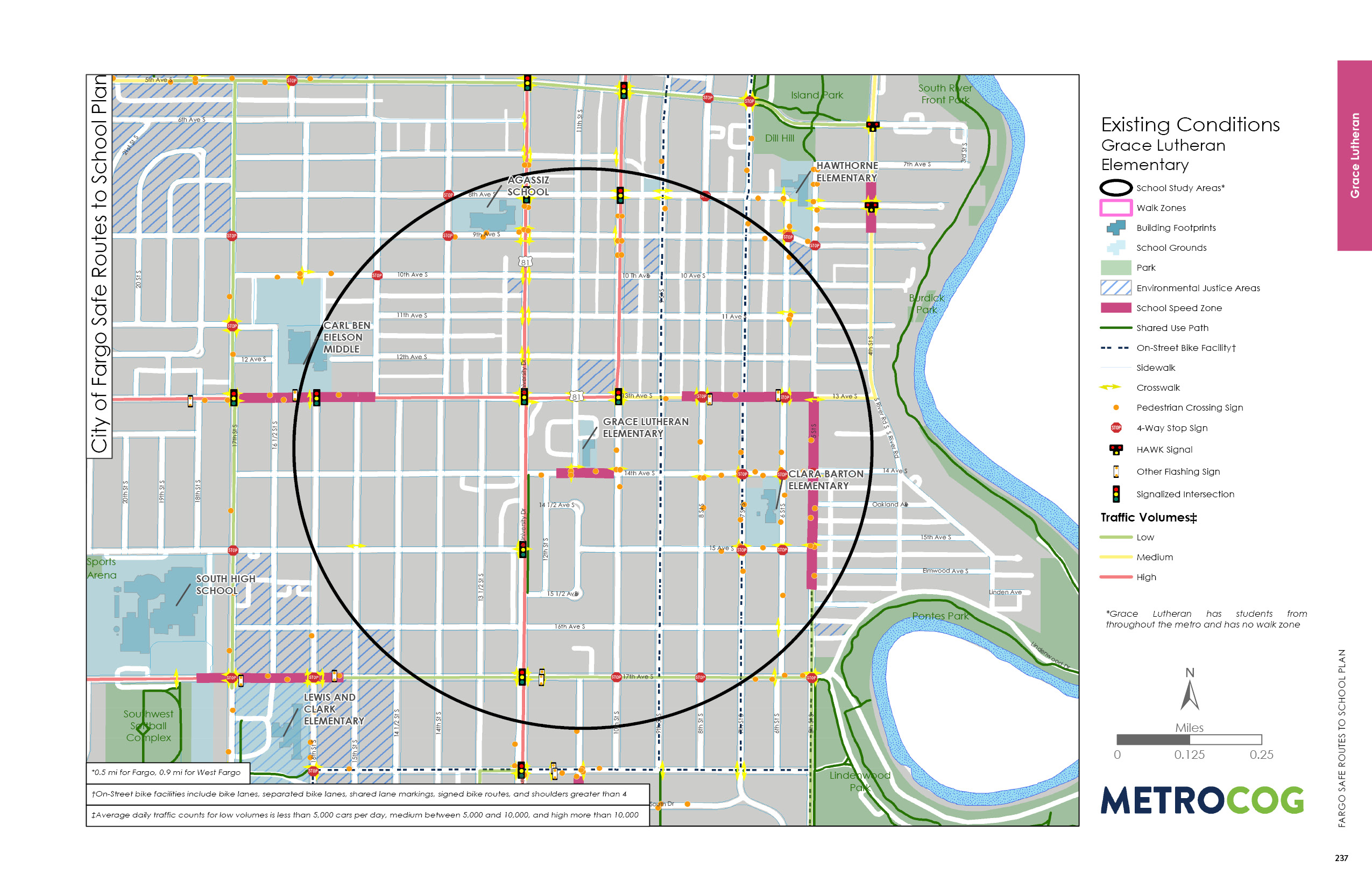 There were a variety of ADA deficiencies noted along the roadway network surrounding Grace Lutheran. The midblock crossing at 11th Street S between the school and the parking lot lacks a curb cut and other crosswalk features. 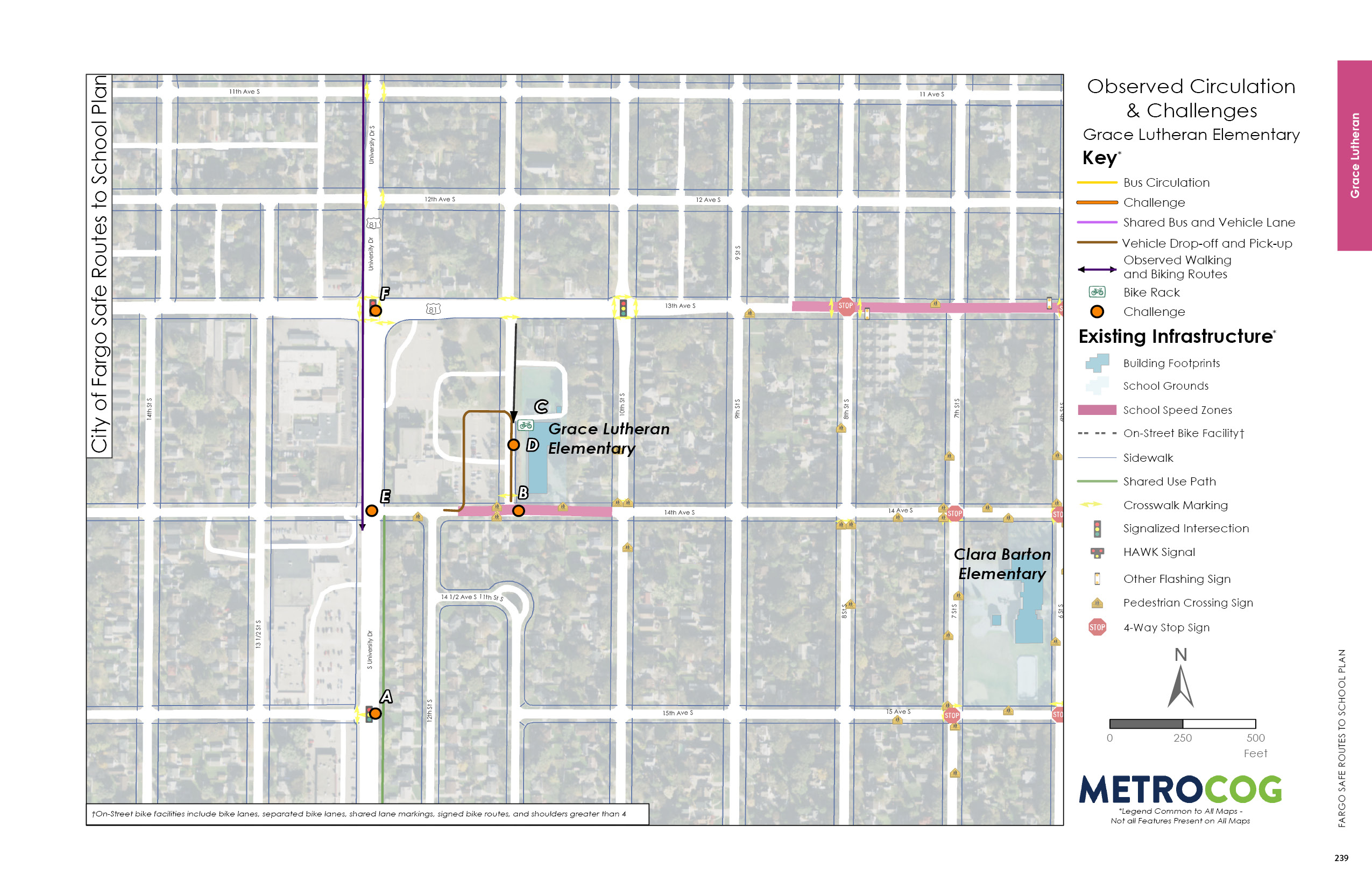 Several curb ramps in the area of Grace Lutheran were noted as not ADA compliant. In particular, the main entry sidewalk has no curb ramp where it meets the curb on 11th Street S. This should be updated to provide access to people using strollers or mobility devices.

The intersection of University Drive and 14th Avenue S is uncomfortable and was cited as a challenge by families and students at multiple schools in this area of Fargo. In order to cross University Drive with a signal, people walking in the area must use 13th Avenue S or 15th Avenue S. Considering 15th Avenue S does not connect to the east, the demand is likely lower at this crossing. Looking further south where the street network and connections may lead to greater demand, the 15th ½ Avenue S crossing is unsignalized, as is the 16th Avenue S crossing. Given demand and connections due to the street network, and because traffic volumes and speeds are high, an improved crossing of University Drive should be prioritized at 14th Avenue S. 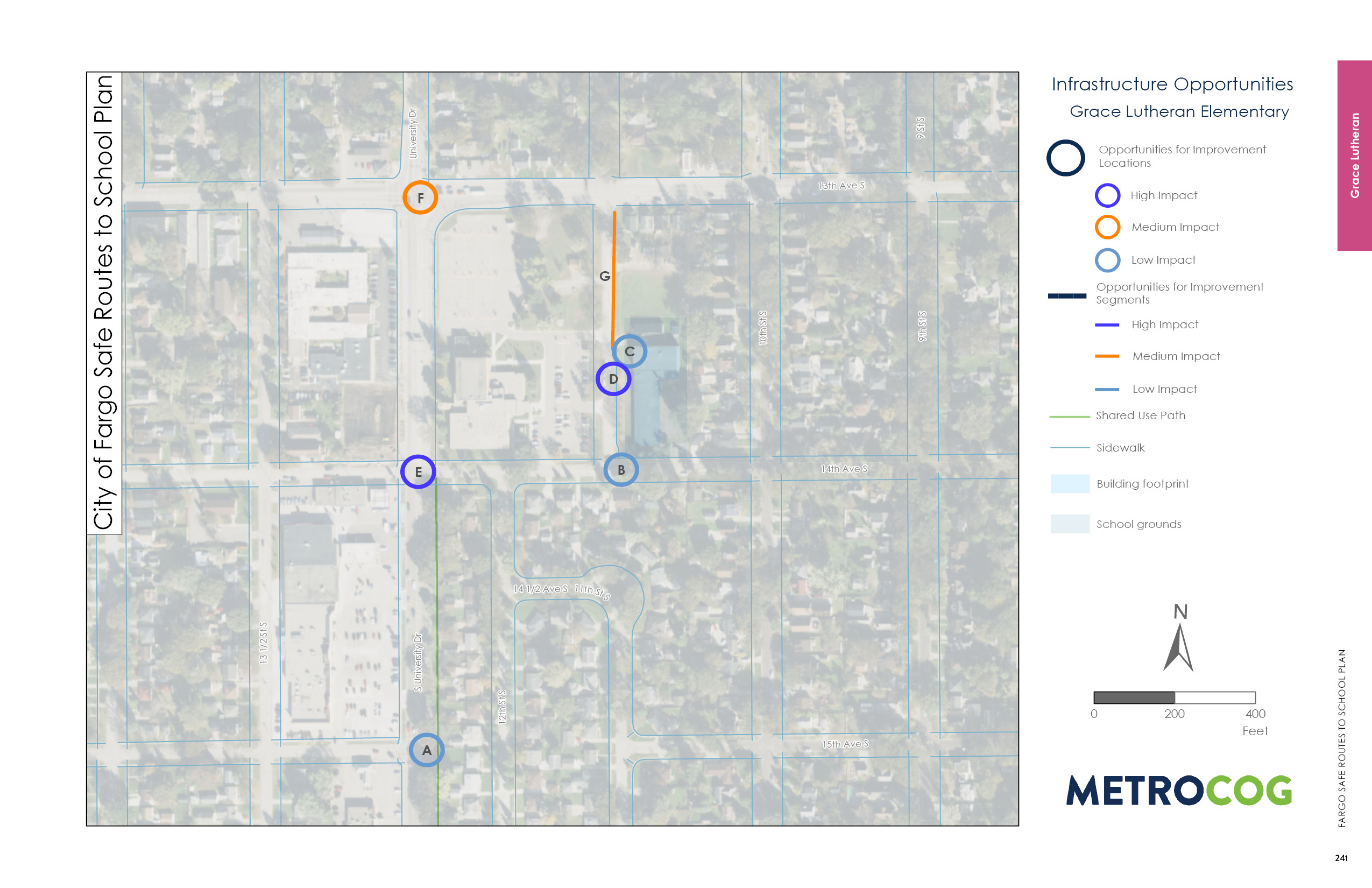 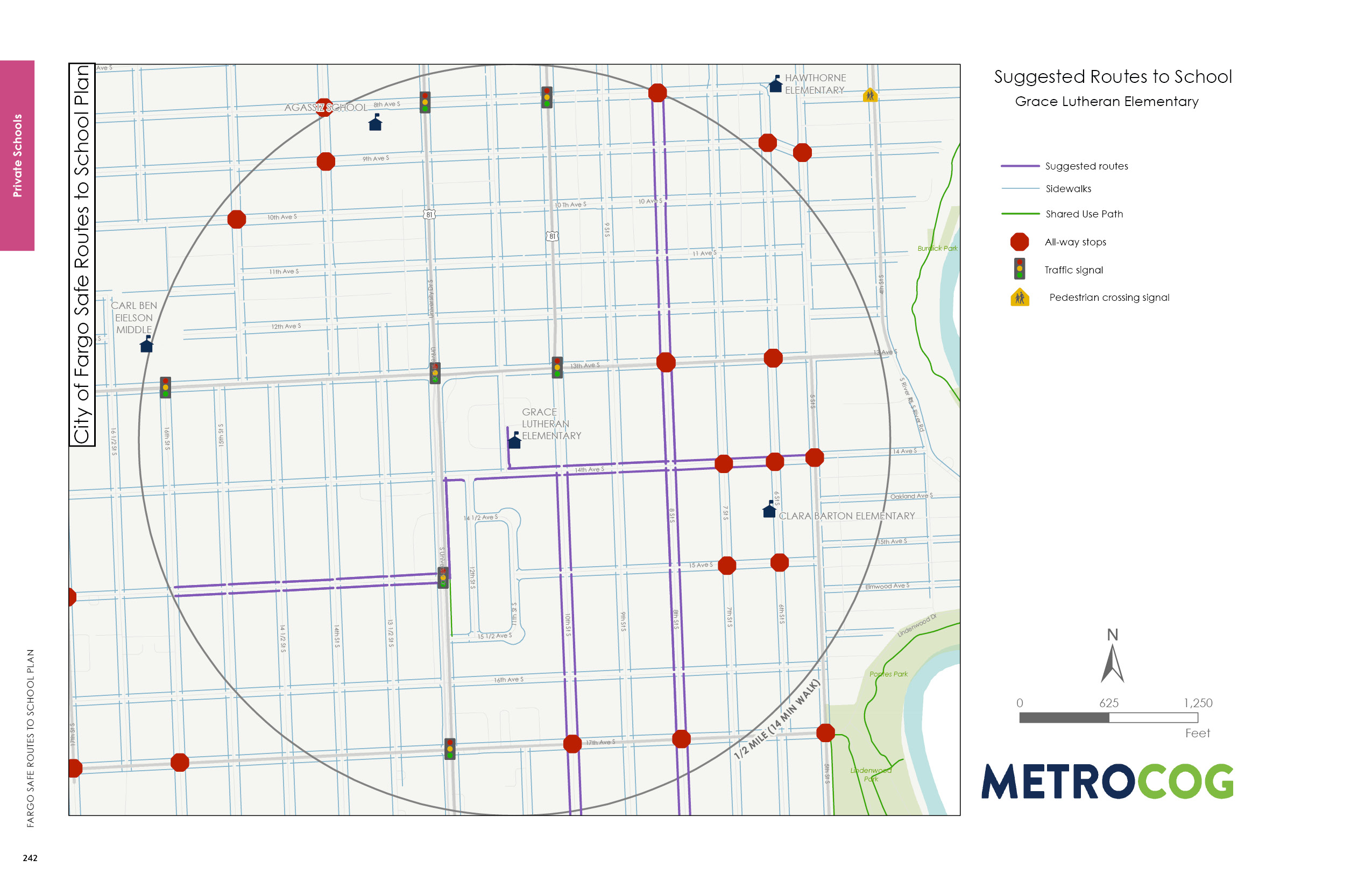 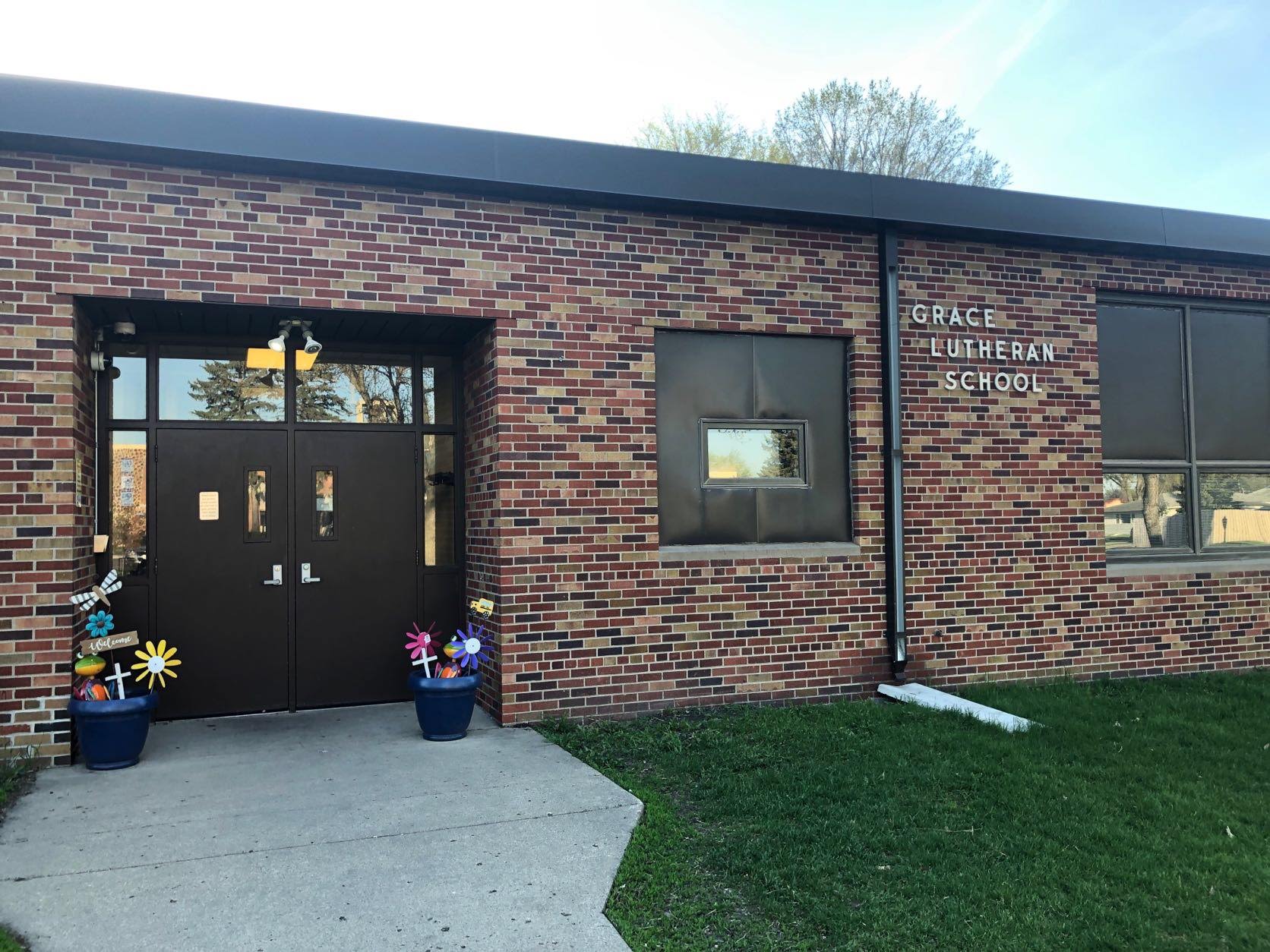