Eagles Elementary is a kindergarten through 5th grade school in the Fargo Public School District. It is located approximately 3.5 miles southeast of Downtown Fargo in the city’s River Drive neighborhood. The neighborhood contains a mix of residential single- and multifamily, and commercial land uses. Within the Eagles boundaries, the per capita incomes and median household incomes are higher than the district average. More than 37 percent of students are eligible for free and reduced lunch programs. Nearly eight percent of students participate in English Language Learners programs.

The Eagles school facility was constructed in 2016. The campus is bound by University Drive S to the west, 35th Avenue S to the north, Eagle Park Drive to the east, and Elim Rehab and Care Center to the south. Eagles students and families who currently walk and bike to school face challenges when crossing University Drive S due to it being a major arterial street with high traffic volumes and high speeds. In addition, 35th Avenue S is another high traffic street as it is a collector roadway for the neighborhoods to the east. To the west and south, the school is surrounded by residential and commercial buildings. There
is a designated school speed zone along University Drive S from north of 35th Avenue S to north of 37th Avenue S. The University Drive S and 35th Avenue S intersection is controlled with a traffic signal, providing a protected pedestrian crossing. There are limited sidewalk connections between the campus and the multifamily housing to the east and southeast. 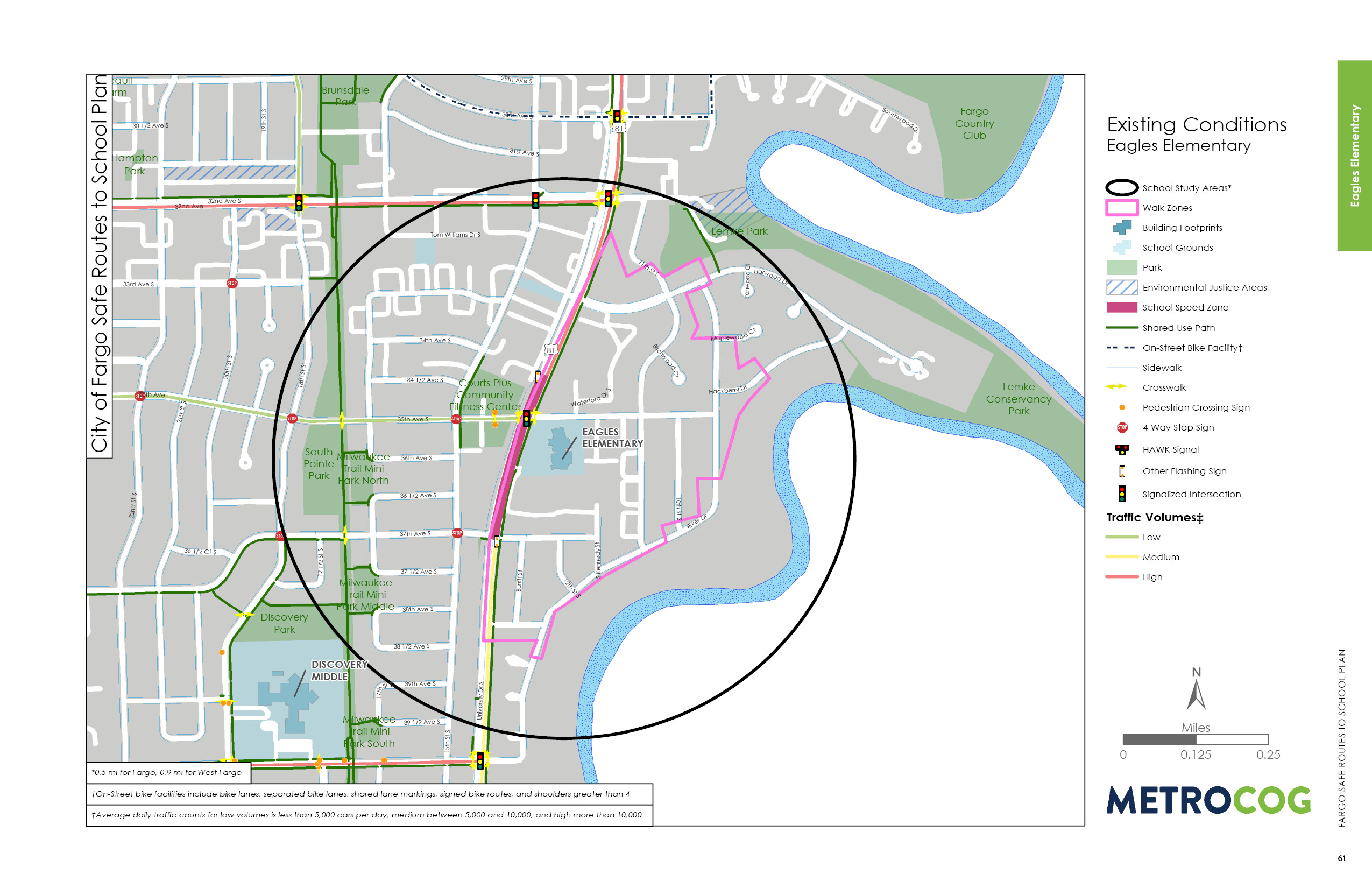 University Drive S is a major barrier to students walking and biking to school and any student west of the road is eligible for busing. However, many students walk or bike along 35th Avenue S to get to school and cross University Drive S. Along 35th Avenue S, west of University Drive S, the road is wide with a Courts Plus parking lot located on the south side of the road. This parking lot does not have parking barriers, so vehicles encroach on the sidewalk when parked along it. Additionally, the parking lot driveway access has reduced visibility due to parking spots directly adjacent to the sidewalk and access driveway. These blind spots create conflict points for students walking and biking on the sidewalk.

A fence on the east side of campus prevents students from walking or biking directly to and from adjacent properties. 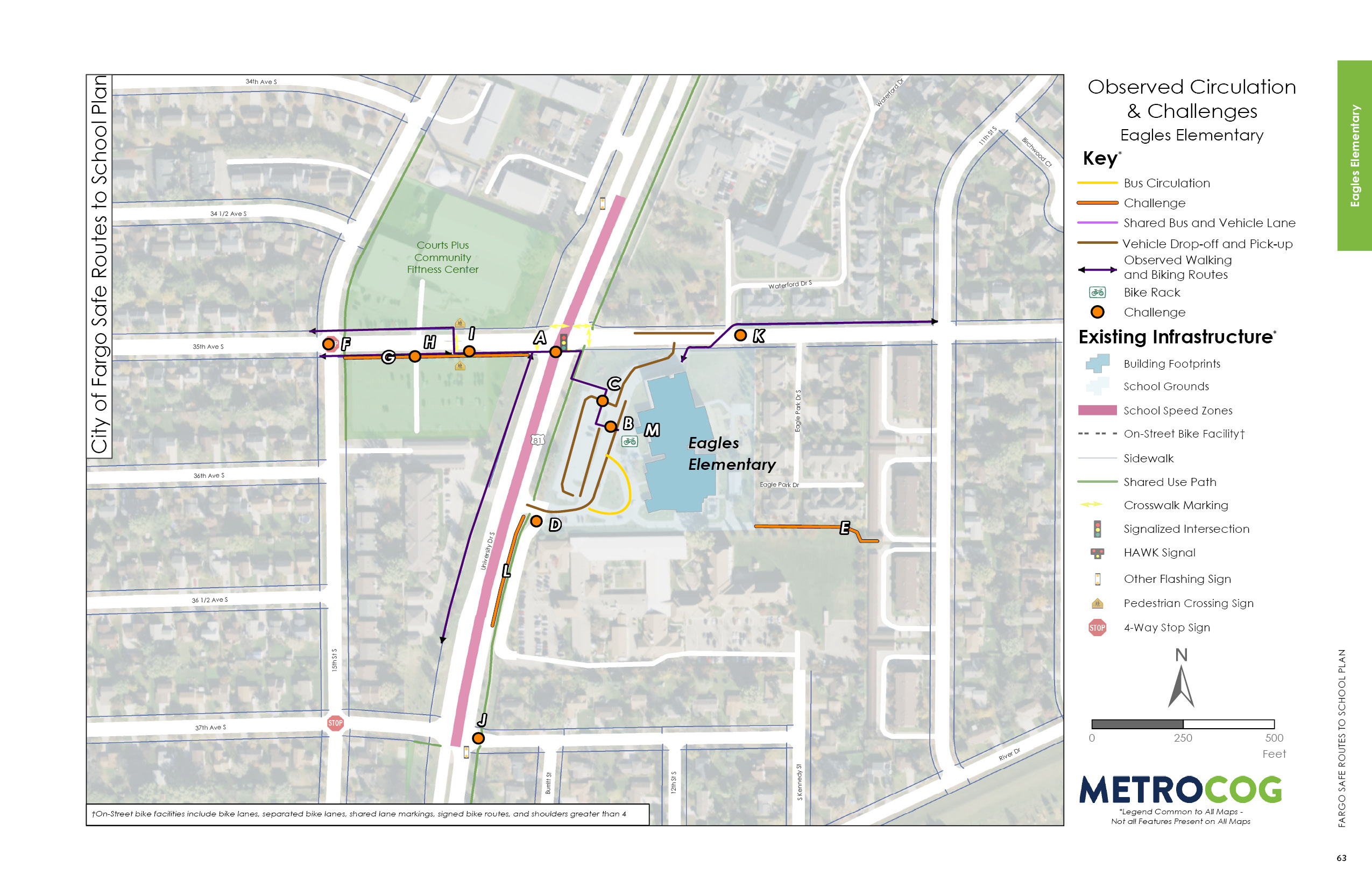 University Drive S presents the biggest challenge for people walking and biking to Eagles Elementary. While narrowing of the roadway should be considered in the future, changes to the curb radius in the near term (especially on the corner nearest to the school) would help slow turning traffic and increase the visibility and queuing space for students waiting to cross. Adding a leading pedestrian interval and no right turn on red would also increase comfort and visibility for students and families traveling across University Drive S. In order to reach this crossing, several students were observed traveling to and from the west. The parking lot at Courts Plus should be modified to improve visibility and limit vehicle encroachment on the pedestrian space. Additionally, improvements could be made at 35th Avenue S and 15th Street S to shorten the crossing distance, calm traffic, and improve visibility.

Neighborhood connections to the east and south of school should be installed and improved to increase comfort for people walking and biking.

Finally, the route for people walking between University Drive S and 35th Avenue S through and across the parking lot and to the front door should be improved by installing paint and separated or raised spaces. 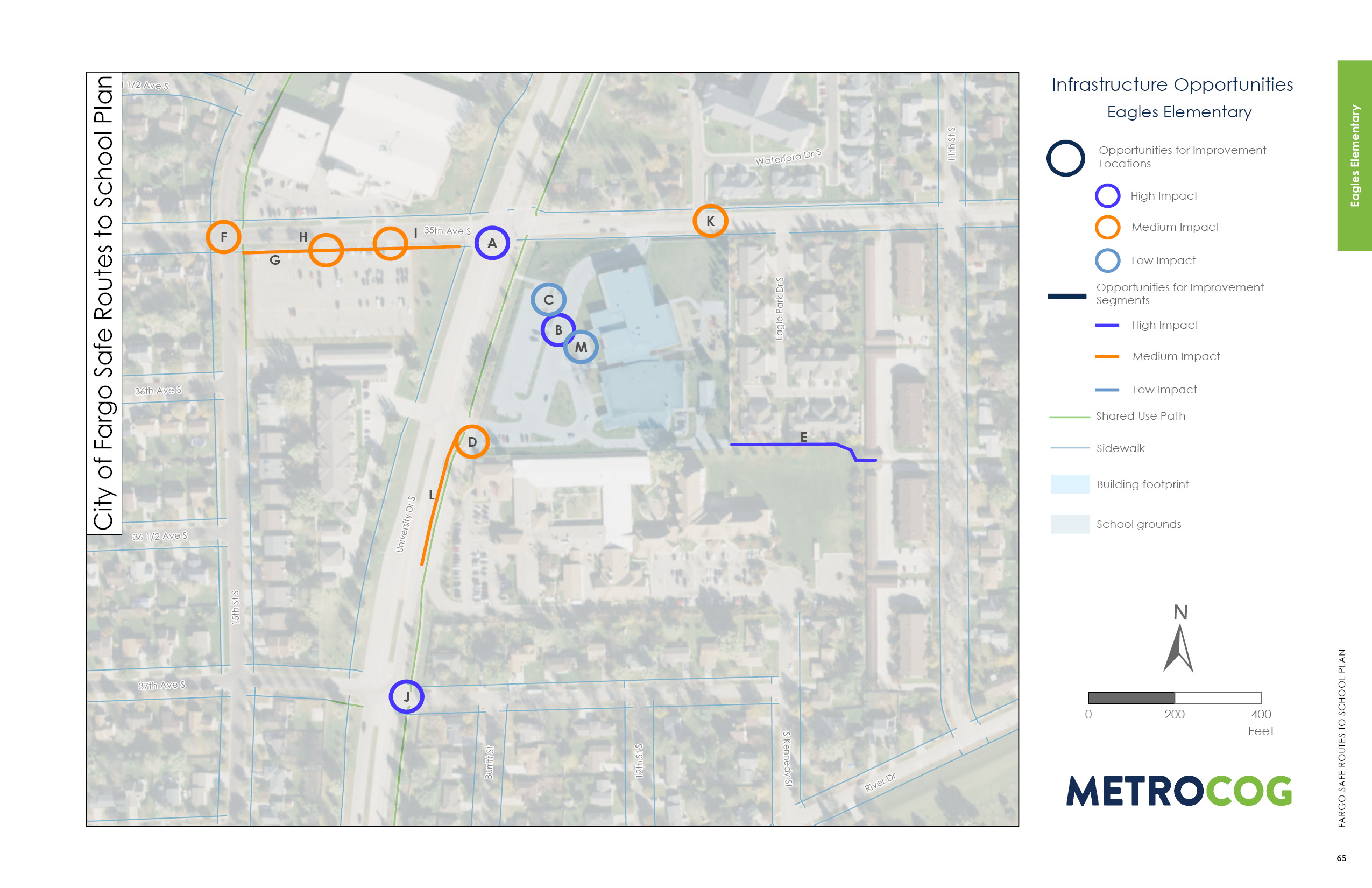 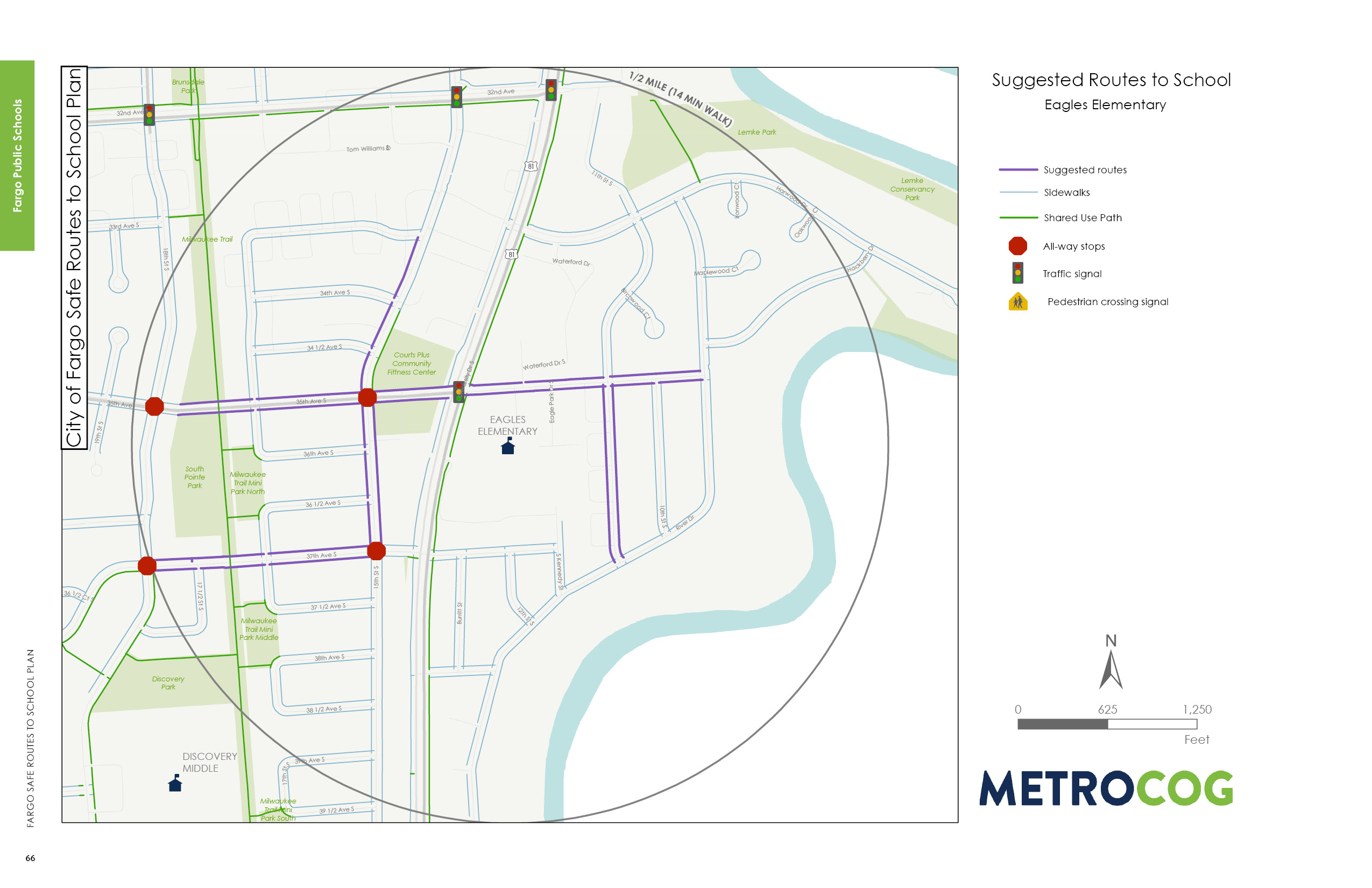 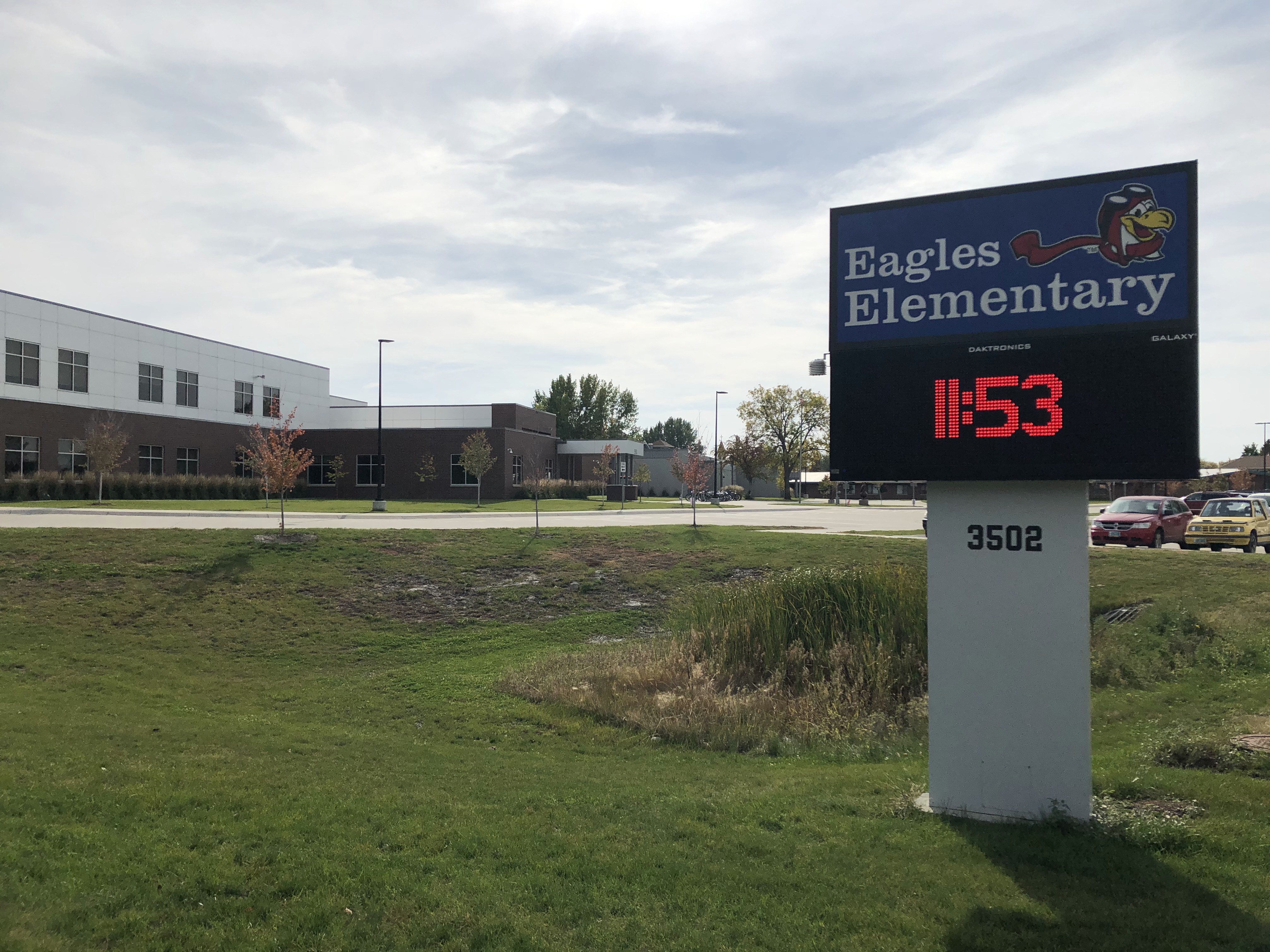 How to Get Involved at Eagles?