Carl Ben Eielson Middle is a 6th through 8th grade school in the Fargo Public School District. It is located approximately 1.3 miles southwest of Downtown Fargo in the city’s Jefferson/Carl Ben Eielson neighborhood. These neighborhoods consist primarily of residential land uses. Within the Carl Ben Eielson boundaries, per capita income and median household income is slightly below the district average. Nearly 42 percent of students are eligible for free and reduced lunch programs. Less than nine percent of students participate in English Language Learners programs.

The Carl Ben Eielson school was constructed in 2006. The campus is bound by 16 1/2 Street S to the west, 13th Avenue S to the south, residential to the east, and 10th Avenue S to the north. The roads surrounding the building consist of local roads with primarily localized traffic patterns, except 13th Avenue S, which has high traffic volumes. There are sidewalks on both sides of the roadway throughout most of the walk zone. 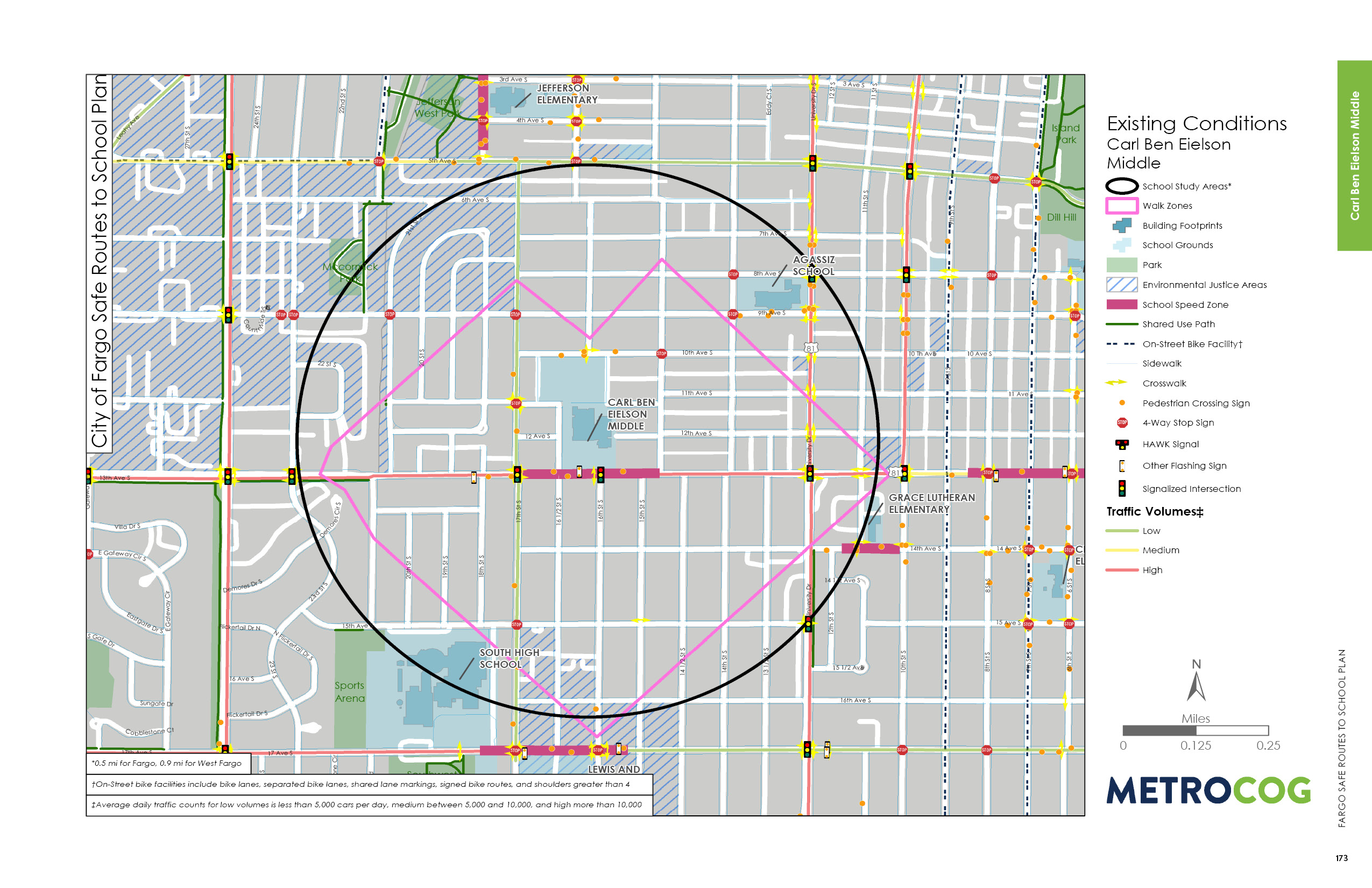 The 13th Avenue S corridor is a primary barrier for students walking and biking to school due to the high traffic volumes. The intersection of 17th Street S and 13th Avenue S is skewed and students reported that drivers do not give them enough space at the crosswalks. Students noted that to avoid the 17th Street S intersection, they prefer to cross at 16 ½ Street S, but it was observed that drivers do not expect pedestrians at this intersection.

There is a pedestrian hybrid beacon (HAWK signal) on the west side of the 16th Street S intersection that is used during student arrival and dismissal. Students do not always activate the signal and drivers have reported being confused about how to interact with the signal. A raised median would further improve pedestrian visibility and crossing safety at this location.

Multiple constraints were identified along the primary circulation loop for parents and caregivers dropping off and picking up. In particular, on the west side of the school, there is poor visibility and sightlines on the
marked crosswalks because of parked cars. The intersection of 11th Avenue S and 17th Street S is offset, which leads to uncertainty for both drivers and pedestrians. The offset leads to long crossing distances and poor visibility. 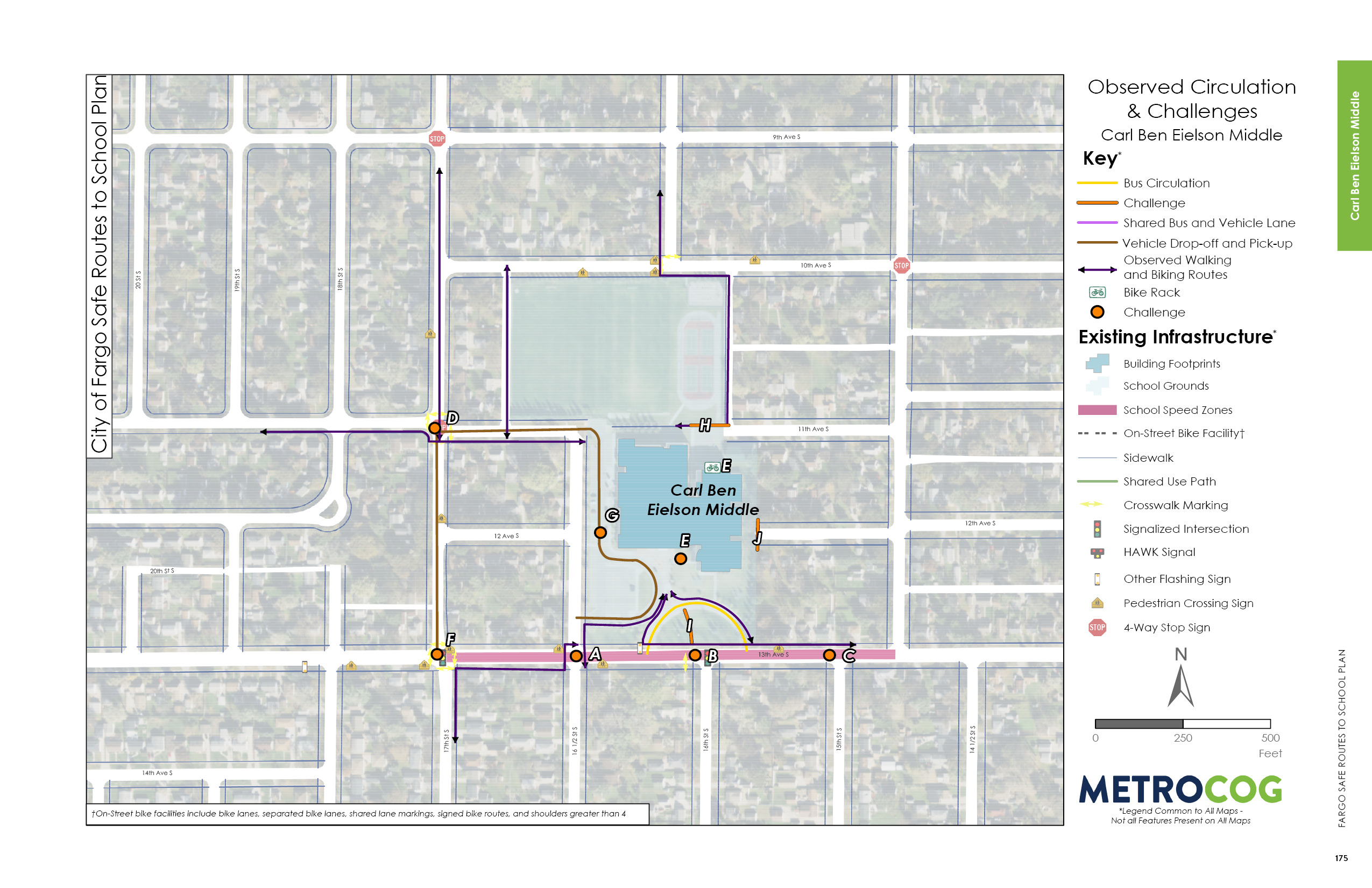 The biggest challenge for students walking and biking to Carl Ben Eielson Middle is 13th Avenue S. While a HAWK signal is present, students coming from the west and east were observed crossing 13th Avenue S before reaching the HAWK. Because of this, improvements should be made along the stretch of 13th Avenue S in front of school in order to slow traffic, shorten crossing distances, and improve visibility. This could be done by installing curb extensions or a median safety island(s) along the corridor, especially where vehicle turning movements are minimal. Several people mentioned the HAWK signal is confusing for drivers. Signs are posted on the boulevard along 13th Avenue S that describe how to interact with the signal as a driver, but the instructions are posted in small lettering unreadable to drivers, and the signs are easy to overlook.

On campus, parking stalls should be removed adjacent to where people are walking, including along the west and north sides of school. Additionally, removing the fence on the east side of school between the sidewalks along 12th Avenue S would improve connections for students and families to the east. 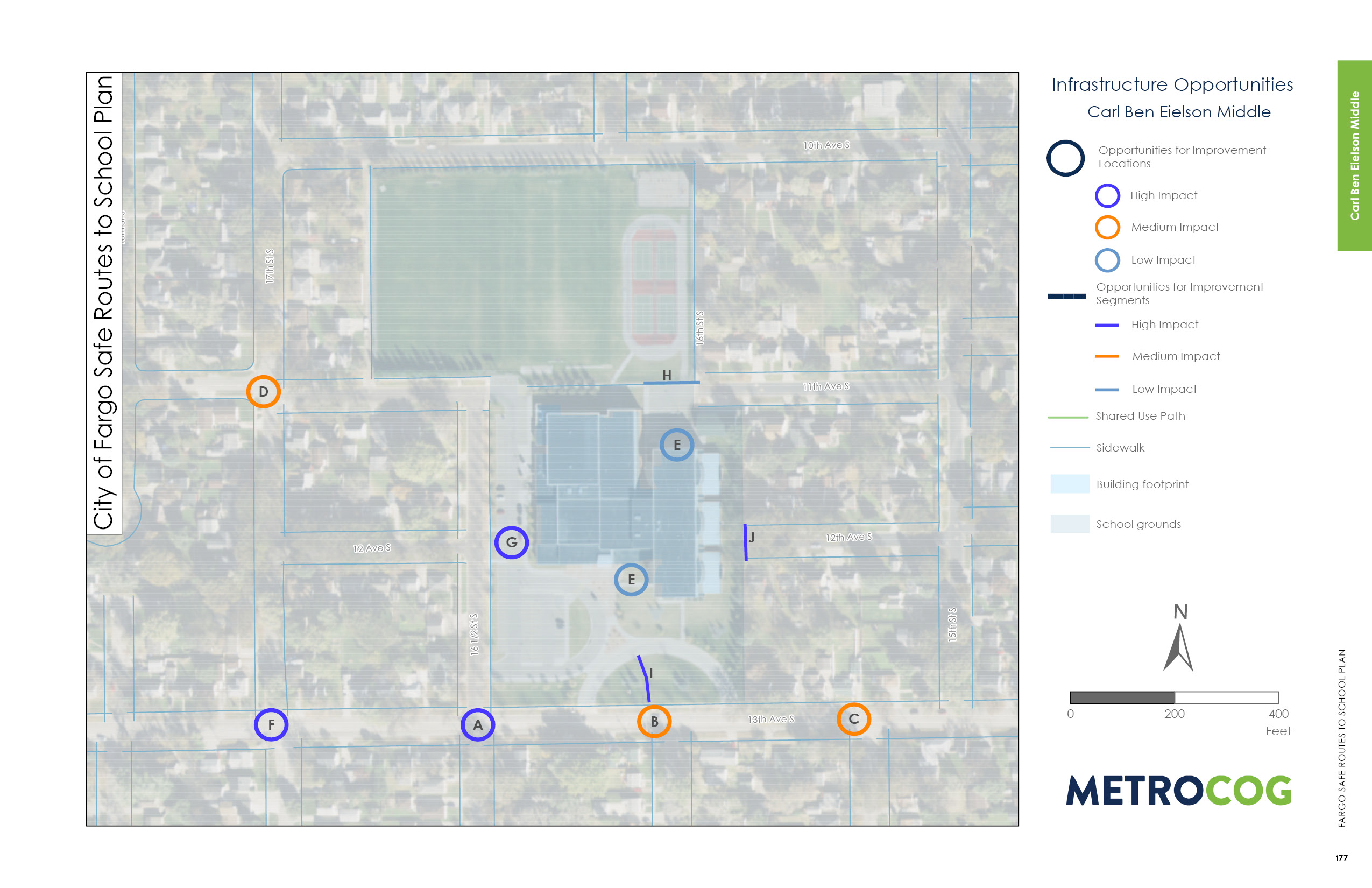 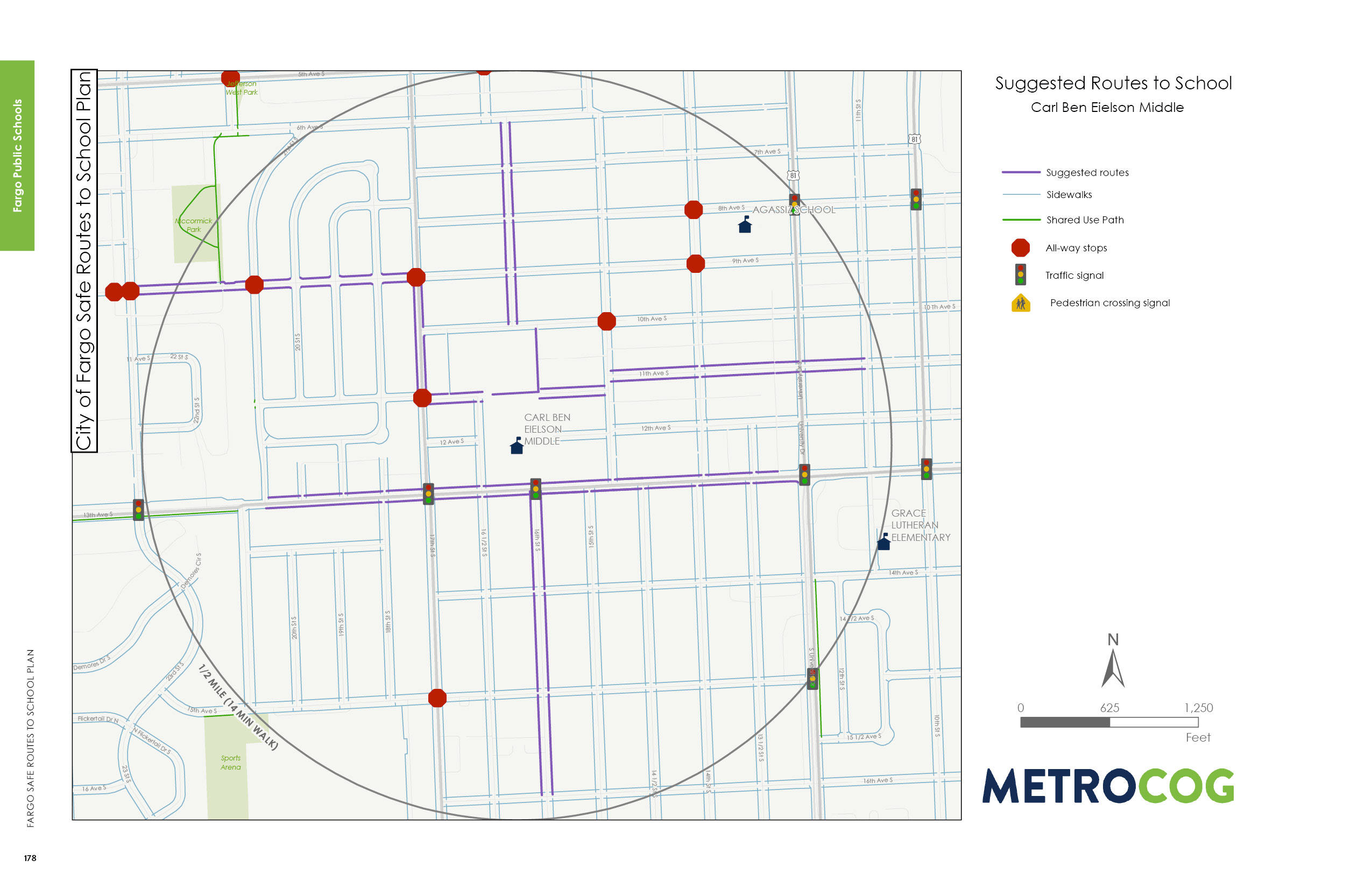 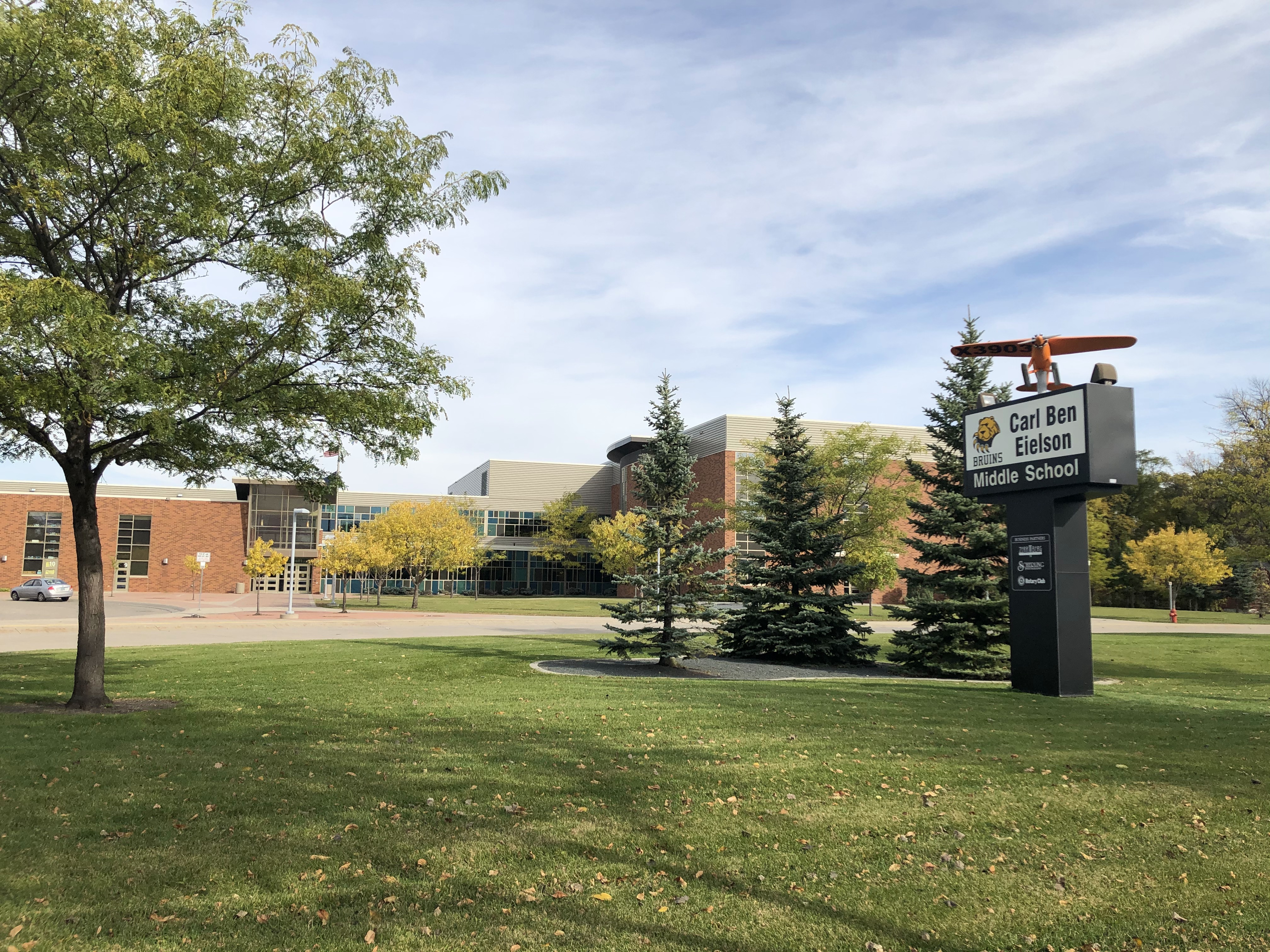