Ben Franklin Middle is a 6th through 8th grade school in the Fargo Public School District. It is located approximately one mile north of downtown Fargo in the city’s Washington neighborhood. The neighborhood consists of primarily residential land uses with some light commercial along Broadway. Within the Ben Franklin boundaries, per capita income is below the district average, as well as, median household income. 32 percent of students are eligible for free and reduced lunch programs. Less than two percent of students participate in English Language Learners programs.

The Ben Franklin school facility was constructed in 1951 and had an extensive remodel in 2003. The campus is bound by 9th Street N to the west, 14th Avenue N to the South, 8th Street N to the east, and 15th Avenue N to the north. The roads surrounding the campus consist of local roadways with close proximity to medium and high traffic volumes along University Drive, 10th Street N, and Broadway. There are sidewalks on both sides of the roadway throughout most of the walk zone. Existing major corridors, such as University Drive, 10th Street N, and Broadway have adequate infrastructure in place to account for safe pedestrian crossing locations for access to this school site. A school speed zone is also located on 8th Street N between 15th Avenue N and 14th Avenue N.

Bicycle parking is located on the east and west sides of Ben Franklin Middle near the main entrances. The racks are comb style and do not allow for locking of the frame and can result in wheel damage. Students who ride mopeds to school park them on the east side of the building near the bicycle racks.

The neighborhood surrounding Ben Franklin Middle is highly walkable. However, the compact nature of the campus and older infrastructure create some challenges for students walking and biking to school.

The 15th Avenue N corridor north of Ben Franklin Middle presents a variety of crossing challenges to students who walk and bike. The whole corridor is extremely wide for it only being a 2 lane roadway. At 10th Street N, 8th Street N, and 7th Street N there is a lack of crosswalk markings, and long crossing distances with parked cars blocking the visibility of crossing students. The intersection of 15th Avenue N and 10th Street N has high volumes of traffic with minimal drivers obeying the posted speed limit of 30 MPH. Drivers do not anticipate pedestrians crossing at this location.

On 14th Avenue N at the intersections of 10th Street N and 9th Street N, drivers do not anticipate pedestrians crossing due to the lack of marked crosswalks and signage.

On the western edge of the Ben Franklin campus, there is a missing sidewalk on the east side of 9th St S from the school building to 21st Ave S, which limits pedestrian access to the school. 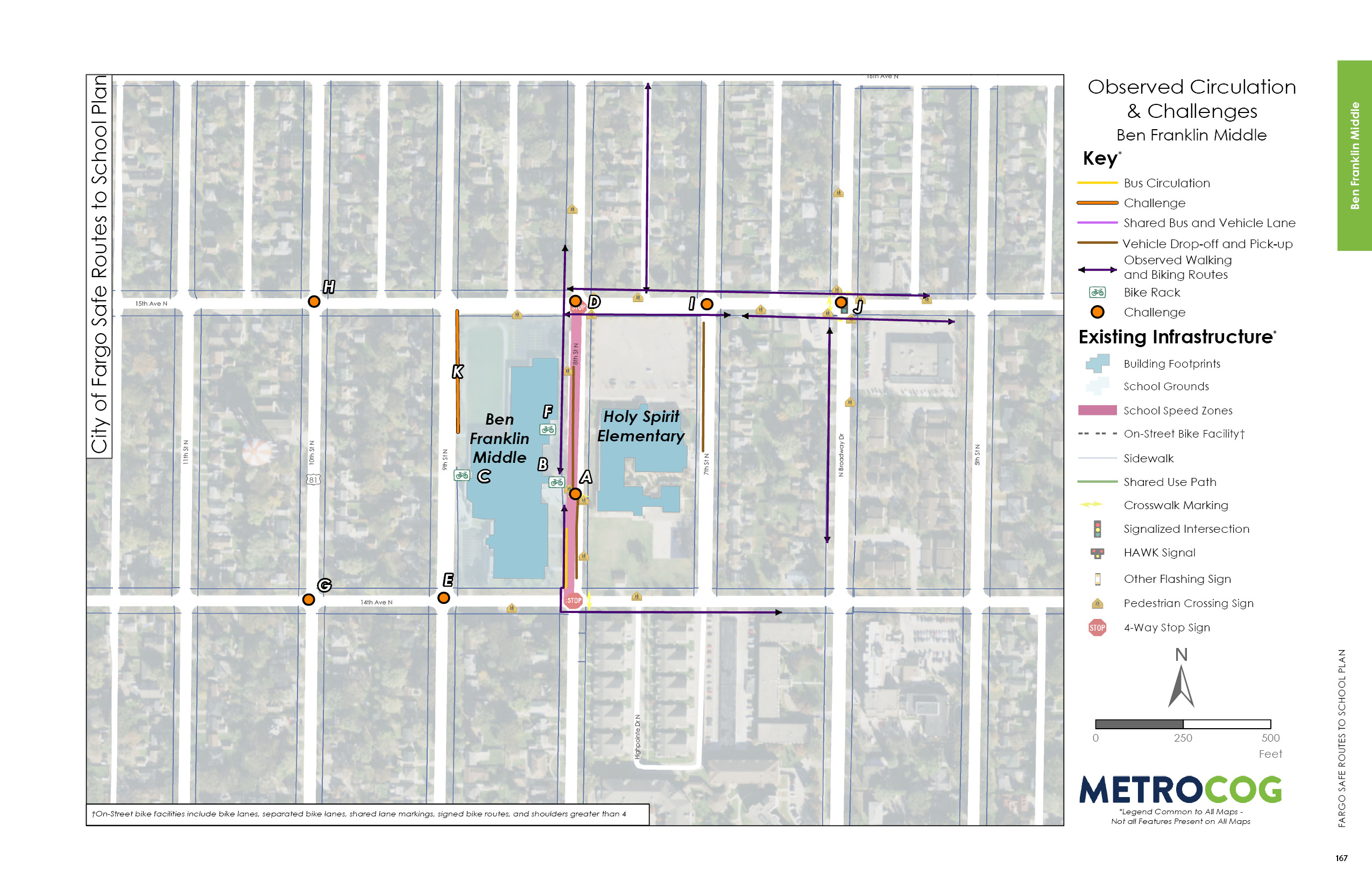 There is an opportunity to enhance the crossing of 15th Avenue N at 8th Street N by installing curb extensions (the impact is on the west leg of the intersection – this is where most students were observed crossing 15th Avenue N). Additional infrastructure enhancements at the midblock crosswalk on 8th Street N in front of the school would further prioritize this as the primary school entrance. Specific opportunities for improvement here would include a raised crosswalk and a corresponding curb extension on the east side of the street.

On the west side of the school, there is an existing courtesy strip adjacent to the roadway on the east side of 9th St S from the school building to 21st Ave S, but it is not wide enough to function as a comfortable sidewalk. The recommendation here is to install a standard sidewalk to fill in this gap in the sidewalk network and allow more students to walk to the entrance on the west side of the building.

Although most students live to the east side of the campus, opportunities for improvement include enhancing the crossing of 10th Street N at 15th Avenue N and at 14th Avenue N. To the east of campus, efforts should be made to coordinate with Holy Spirit to improve street crossings along 15th Avenue N.

Another note: there is an existing underutilized paved track on the northwest corner of the school property. This may be an opportunity to resurface and install a traffic garden for teaching bicycle skills classes. This could be a community asset and not just for use by students at Ben Franklin. 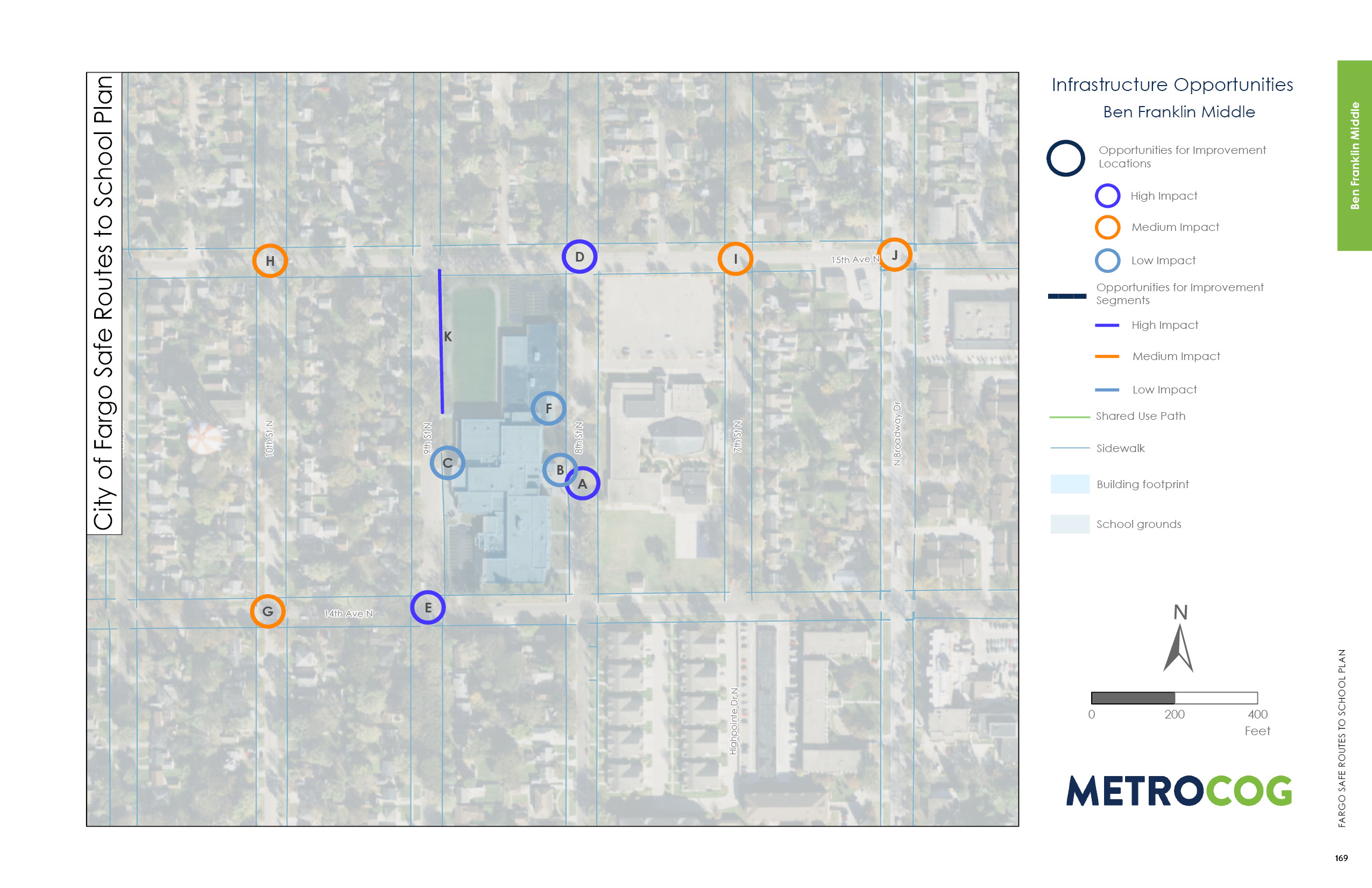 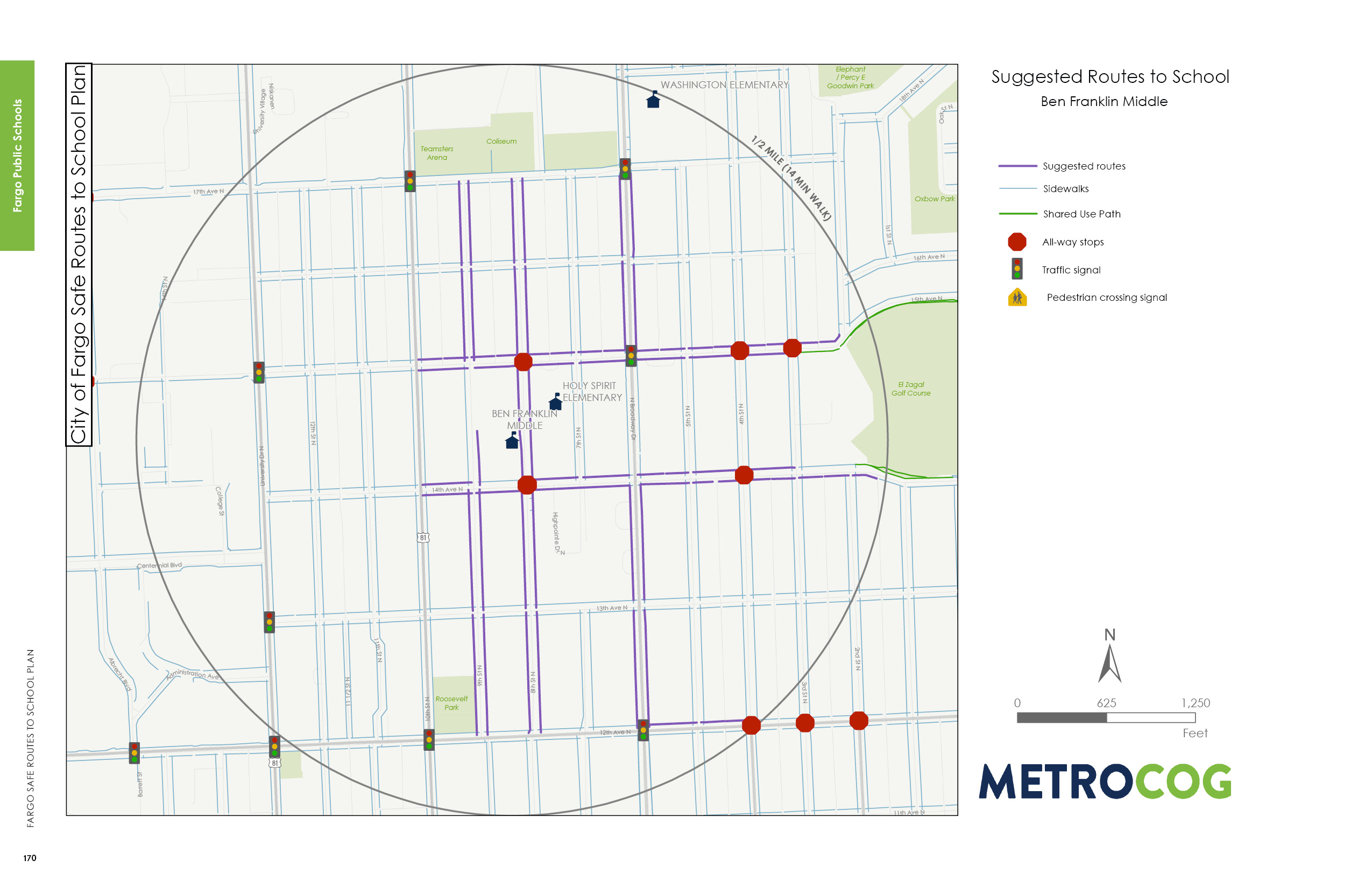 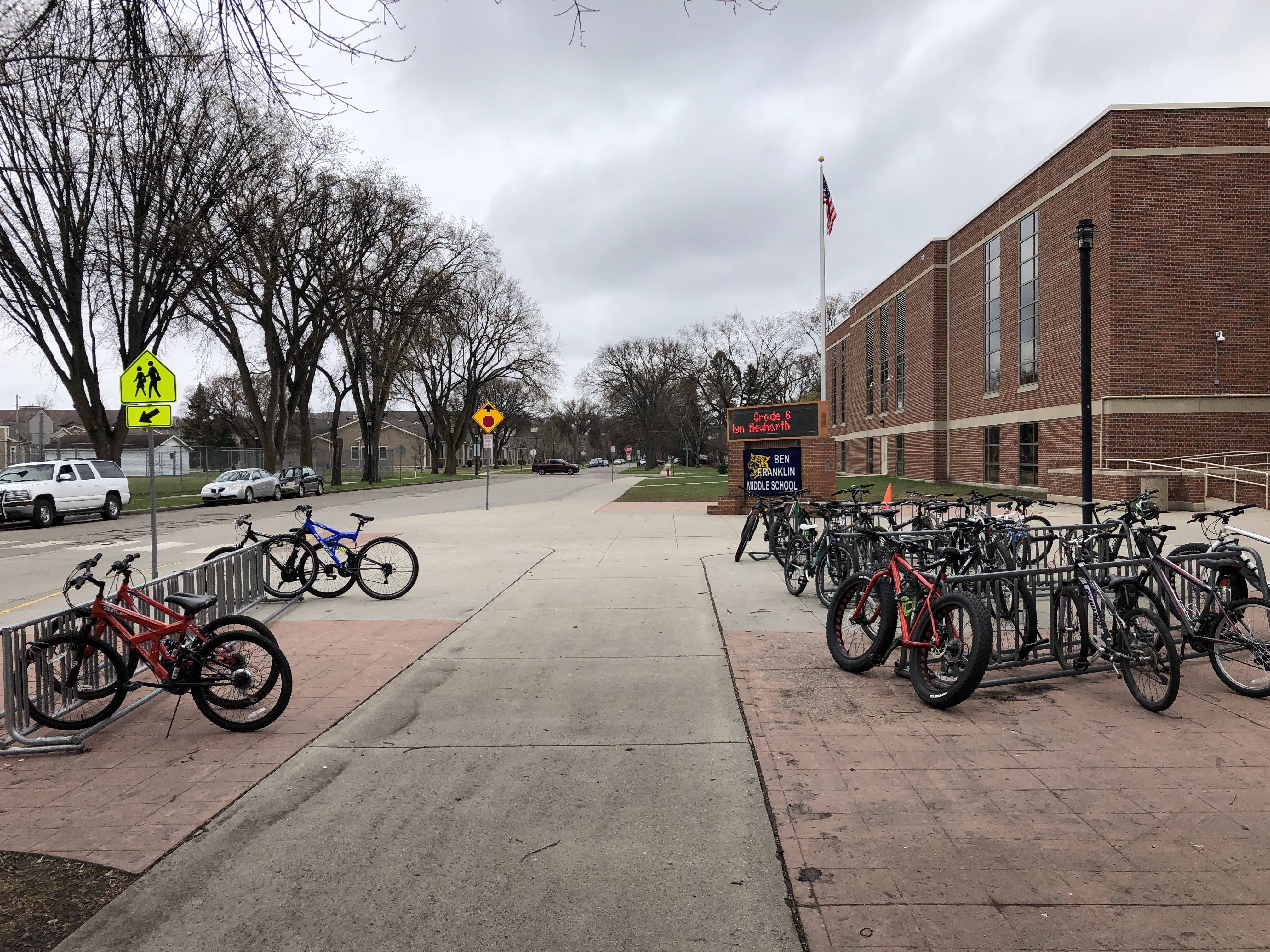